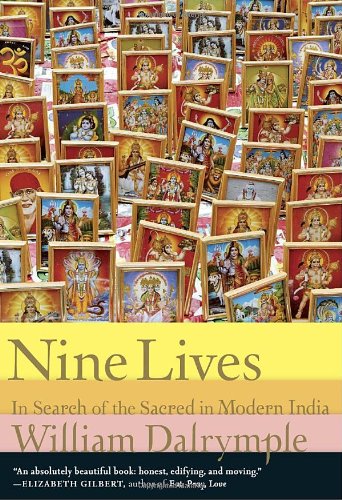 Pick almost any line at random from Scottish travel writer William Dalrymple’s “Nine Lives, ” his biographical portrait gallery of modern Indian religion and—as with a fragment of a hologram—a complete scene emerges. Thus Tashi Passang, a Tibetan monk turned anti-Chinese guerrilla turned Indian soldier re-turned Buddhist monk, encapsulates his philosophy: “[I]f I continued to lead the life of a layman I might acquire many yaks, but I would have nothing to take with me when I died.”

A concern for the overall shape and weight of life animates all of these accounts. Since before the time of the Buddha and the writing of the Sanskrit epics, Indian spirituality has expressed itself as a tension between priestly Brahmins and the wandering holy men known as sadhus. The weight of caste distinction and ritualized faith seems to produce a powerful opposing impulse to strip oneself bare in pursuit of a transcendent unity and harmony.

Not all of the characters profiled in “Nine Lives” are classic renouncers. One is a highly respected maker of bronze idols; another is a reciter of oral epics; a third is a sacred dancer, channeling the gods of southern India and receiving their sacrifices. But all have to some extent turned away from the temptations and prizes—as well as the disruption and alienation—of India’s galloping modernization, taking refuge in ancient traditions and timeless mystical quests.

Of course, present and past coexist in India as elsewhere, and life is always a balance. The author seeks to interview a Tantric skull-feeder who uses the currently unoccupied crania of virgins and suicides to cast spells and summon spirits. Alas, he cannot discuss his work in depth, as any published details could have consequences for his two sons’ ophthalmological practice in America. The necromancer himself is considering packing up his skulls and joining his kids in New Jersey.

Like a curried Canterbury Tales, “Nine Lives” chronicles the life pilgrimages of a cross-section of the subcontinent’s mind-bogglingly varied social and spiritual landscape. We encounter a Jain wealthy family, beginning the process of sallekhana, a slow, dignified and (to these Western eyes) passive-aggressive ritual suicide; an AIDS-stricken deva dasi, a “slave girl of the gods,” or uncommon prostitute; a Muslim fakir originally from India who now dances her way to ecstasy at a Sufi shrine in Pakistan; and cemetery-haunting Tantrics and ganja-smoking Bauls, fringe-dwellers who live to invert the norms and embrace the shadow.

There is much to be learned in these nine snapshots of a society where the sacred is not an abstraction, but rather a felt, sought-after and feared energy, more real than sense perception and more decisive than human will. The same Bengali Communist officials who create Anti-Superstition Committees to wean the populace away from the magic and morbidity of Tantric worship offer goats to Ma Tara, the demonic mother goddess, come election time. Yesterday’s MBA-wielding sales manager for Kelvinator is today’s naked, ash-smeared sadhu. Full renunciation is uncommon, but unlike in America, the possibility of chucking it all and hitting the road is always present. “I have no possessions, so I have no worries,” says the man who once hawked refrigerators to India’s rising classes. “Once you learn to restrain desires, anything becomes possible.”

Dalrymple declares that his particular interest is “the deeply embedded heterodox, syncretic and pluralistic religious and philosophical folk traditions which continue to defy the artificial boundaries of modern political identity.” He means the old religion of the village, still tied to the rhythms of nature and the locally rooted forces and spirits. But modernization takes religious as well as economic form, and the vast tapestry that the British colonial overlords dubbed “Hinduism” is gradually being reduced to “a relatively centralised nationalist ideology” centered on “hyper-masculine hero deities.” It is much the same with Islam, as venerable saints’ shrines come under attack by “a more standardised, middle-class and textual form”—one might say a more robotic form—of the faith. The Sufi dancers of Sindh dream of unity with God, self-abnegation and universal love, while the hard-line, madrassa-trained Wahhabis—like their Hindu equivalents—strive for collective will and purity of belief. In India, where faith defines so much of identity, doctrines of compassion and oneness may abruptly shift into their opposites, fueling sectarian and internecine conflict.

What does the future hold for religion in South Asia? In the cities, undoubtedly a continuing Westernization of the imagination, as urban India becomes increasingly integrated into global capitalism. But the old inequities and divisions of India are only sharpened by the shiny new affluence of shopping malls and Bollywood. The realm of spirit fills a frayed society’s empty spaces, forging solidarity and hope among the marginal and powerless. A Tantric votary living in a cremation ground explains that “we look after one another much better than people who live in proper houses in the cities. In Calcutta, if you fall sick, none of your neighbors may notice you’ve gone. Here if one of us is ill, the others make sure he is all right.”

Dalrymple’s material is fascinating, but his writing can be ponderous, as he struggles to erase any trace of his own views in favor of his informants’ perspectives. Their voices, filtered by translation, are a monotone of earnest, irony-free exposition—is it possible that in the galaxy of humanity that is India, no one has a sense of humor? His prose takes life in description, as when he recounts “the usual melee of Indian religious festivals: street children selling balloons and marigold garlands; a contortionist and a holy man begging for alms; a group of argumentative naked Naga sadhus; a hissing snake goddess and her attendants; lines of bullock carts loaded up with clay images of the goddess Durga; beggars and mendicants; a man selling pink candyfloss to a blare of Bollywood strings emerging from a huge pink loudspeaker attached to the flossing machine.”

At moments like this, one gets a glimpse of the permanence of India—its ability to absorb and assimilate outside influences, from the phalanxes of Alexander to the Internet. “Nine Lives” is a tribute to a certain kind of cultural and individual strength, one based not on a particular ideology so much as a flexibility and openness regarding the deeper questions and underlying forces of existence. The festival scene is an apt symbol of the lives described here, in which sacred and profane merge and dance, bringing forth moments of joyous connection out of a sad and fragmented world.