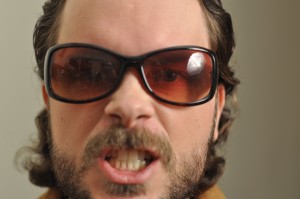 The first Tuesday of every month, an eclectic ensemble of writers, actors, comedians, puppeteers and other performers gather at the Hungry Brain in Roscoe Village for an improvised evening. Under the umbrella of “So You Think You Have Nerves of Steel,” the artists whisk up an interactive show that promises nothing less than the least expected.

“I’m surprised at what they come up with,” admits Jacob Knabb, who coordinates the event on behalf of Chicago/Nashville-based literary magazine The 2nd Hand, as well as serving as editor-in-chief of Another Chicago Magazine. “I have an idea, but I don’t exactly know. [This month] all I know is we need a projector.”

An active member of the city’s literary scene, Knabb scouts talent—”people who would fit,” he says—while out and about at readings, comedy clubs and theaters. Besides Knabb himself, who hosts the event in character as an Appalachian janitor/wannabe country music star named Harold Ray, and Kate Duva, a regular contributor to The 2nd Hand, the lineup hardly ever repeats artists or characters. Its mercurial setup creates an unusual display of “not necessarily shocking, but sometimes sad or funny” performances, all with a heavy emotional impact, explains Knabb.

“It varies from performer to performer. They are encouraged to be interactive, to bring the audience into the fold, to take chances. They have the space to do what they want.”

Founded by C.T. Ballentine and Todd Dills, the event has transformed from “risky fiction to experimental fiction, to more experimental in general,” says Knabb. In previous shows, one writer wanted to hold a staring contest onstage; she invited an audience member to stare and stare until tears dripped down their cheeks. Another performer challenged the entire room to an arm-wrestling contest, defeating all six opponents.

“It’s blurring these kinds of things, a staring contest with a thirty-minute-long dance-reading-podcast. We’re looking for intensity and challenging entertainment.”

The 2nd Hand will announce its upcoming 300-page book (a compilation of the top works from its ten years of online and as a quarterly broadsheet publication) and the Kickstarter fundraiser supporting it, on December 7. Tuesday’s show features writers Michael Zapata, Matt Bell, Michael Czyzniejewski, Natalie Edwards, Mary Hamilton and Lindsay Hunter, as well as puppeteer Brandon Will and author Spencer Dew. (Kristine Sherred)

Hungry Brain, 2319 West Belmont, (773)935-2118. First Tuesday of every month through March. Doors open at 8pm. No cover, but The 2nd Hand passes a hat to collect donations for the performers. the2ndhand.com.