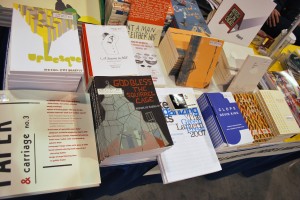 The Green Lantern Gallery has had a tumultuous year: after its initial incarnation was shut down due to a city ordinance, Green Lantern director Caroline Picard teamed up with featherproof books’ Zach Dodson to create a multimedia art space. Temporarily housed in Ukrainian Village, the idea was for the revamped Green Lantern Gallery to eventually move into permanent digs designed to foster inter-art collaborations—a gallery, office space for the two presses, The Paper Cave indie bookstore, a performance space and a café/bar, staffed by four year-long artists-in-residence.

For now, though, Picard’s dream will have to wait. With the lease up on their temporary space and unable to find a suitable long-term home, The Green Lantern Gallery is closing up shop. “We did want to have one last hurrah in the space we had, though,” explains Dodson. With that, “The Last Annual Midwest Pop-Up Bookshop” was born.

And while the one-day-only pop-up shop marks the end of one dream, it seems to have planted the seeds for another: The Green Lantern’s swan song is also the driving force behind the now-nationwide “Indie Lit Roadshow,” a multi-city weekend celebration of indie presses from coast to coast. “I was talking to Summer Robinson who runs the great Pilot Books in Seattle, and they were doing a big event that same weekend, so we thought: why not combine forces?” says Dodson. “Then we asked a few friends in other cities to do something that weekend too, and they asked others, and it very quickly spiraled into a nation-wide event with ten participating cities. I’m still reeling from how quickly that all happened.”

From Seattle to Austin to Baltimore, indie presses, journals, magazines, and reading series will be joining forces to celebrate the fruits of each city’s home-grown lit scene. In Chicago, Green Lantern and featherproof have teamed up with Knee-Jerk Magazine and Artifice Magazine to host a roster of participants that reads as a who’s who of Chicago indie letters: Quimbys, Hobart, Poetry, The Book Cellar, Another Chicago Magazine, Rose Metal Press, THE2NDHAND, Dzanc, Make Magazine, The Show ‘n Tell Show, Other Voices Books, The Encyclopedia Show, Sara Ranchouse Publishing, Vouched Books, Switchback Books, The Paper Cave, PANK Magazine, Golden Age and Stop Smiling Books will all be in attendance.