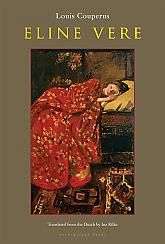 Something is bothering Eline Vere, the eponymous heroine of Louis Couperus’ 1889 Dutch novel, but no one can quite figure out what it is, least of all Eline herself. Her life would seem to be a charmed one, an endless round of social calls, lavish dinner parties and promenades among the highest-ranking denizens of The Hague, a city glittering with wealth and culture. Yet she never feels quite at ease within the aristocratic milieu into which she was born. She is one of those misfit characters, like Emma Bovary, Julien Sorel or Huck Finn, whose discomfort reveals the nature and limits of their world.

Couperus’ hefty novel focuses on the tribulations of the fragile and ethereal Eline, who at one point has everything she thinks she wants, including engagement to a solid, devoted and titled member of her set. But she is torn by her half-real, half-willed attachment to a ne’er-do-well cousin, and a vague, troubling sense of detachment and discontent.

Earlier, she had fantasized about an opera singer, creating a dream world centered on him. Then one day she sees him out of costume, “like a burly carpenter in a dress coat that was too tight … he looked common and overweight, with a disagreeable, sullen expression about the bearded mouth and in the eyes glowering from under bushy eyebrows.” She is “horrified” by the “enormity of her mistake.”

Such oscillations are not the workings of a sound mind. Torn between ecstatic idealization and bitter disillusionment, Eline finds it ever harder to exist within her constrained setting, where women are seen more as decorative objects than as sentient beings. She becomes difficult, unpredictable, rebellious. Bored, she thinks she can cure her inward condition by shocking others: “Sometimes I feel very inclined to do something outrageous!” she declares to her cousin, whom she mistakenly believes is in sympathy with her. But she is cut off and radically alone in the midst of society.

Today, perhaps, Eline Vere would be labeled a narcissist—a person residing behind a mask, tormented by unmanageable shame and envy, unable to connect with others, craving attention but afraid of being really seen. Her existence is theatrical, a series of elaborate poses like the tableaux vivants with which the novel opens. Drawn to the notion of life as aesthetic gesture, Eline finds herself unable to make choices, take responsibility, sustain relationships or otherwise come to terms with an imperfect reality.

As her charming façade begins to crumble under the weight of disappointment and disapproval, her vitality flags. In the end, she is like a gorgeous wind-up toy come unsprung. “Shall I tell you what to do when you grow up?” she rants to her 7-year-old nephew near the end. “Never think about anything, poppet! Don’t think at all! Just eat, drink and have fun for as long as you can, and then … then you must marry! But don’t start thinking, whatever you do!”

Her decline contrasts with the courtships and marriages that flower around her. In this novel, as in Jane Austen’s, achieving happiness means being able to make the transition from the Olympian heights of aristocratic disdain to the lower but more human realm of acceptance and compassion. It is no easy task for those trained since birth to see the less favored as extras and helpers on the great stage set of life. Couperus subtly conveys that Eline’s narcissism is a natural and destructive outgrowth of her class position in an oppressively stratified society. Like a canary in a coal mine, the hypersensitive Eline reacts to toxic elements that other characters cannot detect. Her fate is more than a tragedy; it is an alarm bell.

Couperus achieved fame early, writing this novel at age 26. With its rich and nuanced portrayals, especially of women, and its painterly descriptions of plush city mansions and verdant rural estates, the book proved popular with readers curious about the private lives of the sifted few. It captures the great age of conspicuous consumption—after the steam engine and before the income tax—with a tightly woven network of characters who lead lives of physical abundance and intellectual and spiritual dearth. Like latter-day yuppies, these nineteenth-century aristos are absorbed in their private dramas and untroubled by their privileges. An egotistical innocence reigns, disturbed only by Eline’s buzzing nerves.

“Eline Vere” was published the year before “The Picture of Dorian Gray” by Oscar Wilde, who admired Couperus’ work. Like Wilde, Couperus is thought to have been homosexual, his childless marriage essentially an affectionate friendship and social convenience. Eline, like Dorian, is drawn toward a perfumed and heady decadence that is the shadow of Victorian morality and the cult of domesticity. Each resists social expectations by creating and disappearing into an image of changeless youth and beauty—which proves, paradoxically, to be a kind of death. And each pays the price for nonconformity, serving as an example for others, but at the same time indicating that Victorian roles and verities were weakening, and repressed energies were rising to the surface.

Archipelago Books is to be commended for re-introducing this important novel and writer to the English-speaking world. Ina Rilke’s fluid, natural translation is a joy to read, and the paperback edition is handsomely designed and printed, an increasingly rare experience in this era of Nook and Kindle.

“Eline Vere” is a doorway into a foreign world, governed by rigid and by now almost forgotten codes of conduct and respectability. The people who live there seem wired differently than us; they are as open to passionate feeling as they are inhibited about the body. The book is thus genuinely romantic in a way that our own postmodern literature, with its weightless and affectless irony, is not. “Eline Vere” returns us to the days when novels served unapologetically as moral and sentimental education, and the lessons are still well taken.