by Brian Hieggelke
January 11, 2011Filed under: 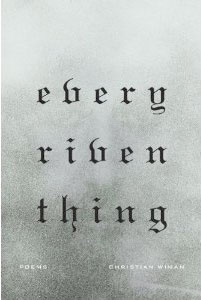 As the editor of Poetry magazine, Christian Wiman resides atop a prominent perch, perhaps one precarious for a poet. With its recently found riches, this once relatively obscure publication now occupies a place of increasing prominence and Wiman, as its leader, has become known these last few years as much for his life as for his writing. To summarize: he stopped writing, then fell in love and got married, found out he had a rare and incurable blood cancer—with indeterminate consequences regarding his life expectancy—and turned to a deeper, public commitment to Christianity. That’s a load of information for a writer’s work to bear, but fortunately, Wiman returned to his craft and his new collection of poems, “Every Riven Thing,” manages to carry all of his baggage weightlessly. His is a world of acute insight into the human questions—of mortality, of God, of nature—rendered without proselytizing, without prognosis. He just observes, and still questions. He’s as at home on the trains of the city as he is on the range of his native West Texas. He believes in God, yet leads us into the existential void, into the terror of the terminal soul. His illness sharpens his vision; his words are radiated. And yet, he’s funny, using humor to disarm the darkness that lies within reach  of his questions. His public readings are a rarity, and his work works best aloud, so consider yourself fairly warned about the consequences of your absence. (Brian Hieggelke)