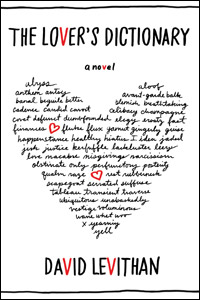 The breakup. Two people meet, fall in love, fall out of love. Feelings are hurt, chances are missed, lives are changed.

We all know the story. Not just because it is playing at the box office every weekend and blasting from our iPods and collecting dust on our bookshelves, but because we’ve actually lived it. Which is kind of unique, when you think about it: few among us have turned into a cockroach overnight or tried to solve a murder or worked in the meat factories of Chicago at the turn of the century—but we have all had our hearts broken.

As a result, the breakup story tends to be rather predictable. Familiar in all the wrong ways.

Veritably, all the usual plot points dot the trajectory of the relationship at the center of the book—the Meeting, the Fall-In-Love, the Move-In, the Differences Emerge, the Unraveling, the End, the Later-Reflection-w/Wistfulness-and-Regret, the Glimpse-of-Hope.

But Levithan, an editorial director at Scholastic whose young-adult novels include “Nick and Norah’s Infinite Playlist” and the intrepid “Boy Meets Boy,” has a catch: the whole story is related through first-person dictionary entries.

So for instance: we first get hints at one of the lovers’ drinking problem in an entry for “abstain.” We get little glimpses of the relationship dynamics in entries for “champagne” and “gregarious.” And a few of the entries, like “flux” and “disabuse,” are more like small philosophical propositions than anything else.

These “definitions” range in length from a couple pages to one sentence to an entry for “celibacy,” which simply reads: “n/a.”

Individually, they are by turns funny, sad and enigmatic. Taken as a whole, they paint a vivid portrait of a doomed relationship.

The unnamed narrator and his lover—identified only as “you,” and without given gender—meet through an online dating service. They click, eventually move in together and after five years of ups and downs, “you” cheats on the narrator while visiting a friend in Austin.

It’s not surprising that the narrator chooses to map the relationship through language because, despite all the lovers’ differences, the biggest obstacle is communication.

The little idiosyncrasies—those oddly specific details you can only get from being with someone for a really long time, things they appreciate about each other—they never express verbally. And when they try to vocalize those that they dislike, they lumber and fail. Words are hastily chosen. Expanses of meaning are widdled down to slivers. Semiotic attention is paid to entendre and double-entendre.

– that’ll send your thoughts into the library of memories of your own failed relationships, recognizing the universality of their shortcomings, comforted and disturbed by Levithan’s ability to put into words what you’ve previously only felt.

But the paradox of “The Lover’s Dictionary” is that Levithan, in the end, is wary of words. Frustrated by their tendency to dilute meaning.

In “ineffable,” he writes:

“These words will ultimately end up being the barest of reflections, devoid of the sensations words cannot convey. Trying to write about love is ultimately like trying to have a dictionary represent life. No matter how many words there are, there will never be enough.”

The philosopher Wittgenstein believed an idea could not be truly expressed in words, that an idea is too complex. Levithan seems to feel that way about love.

Wittgenstein, therefore, proposed that words should be used as steps a reader could climb to the top of and, looking down, see the idea laid out before them, like a view of the city from a fire escape.

That seems to be what Levithan does here. And the view is breathtaking.

I stumbled upon this blog looking for this novel’s review, to see if it’d be a good read, and you have written an awesome review of it, I will definitely be reading this novel soon thanks for a great blog!