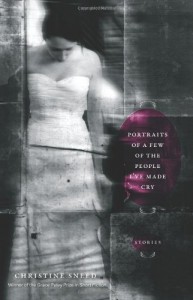 Ordinarily one must make allowances for an author’s first short-story collection. No such handicapping is necessary here: Not only are Christine Sneed’s characters fully realized, she is sufficiently mature to plumb their relationships thoroughly and accomplished enough to fully realize the environments they occupy. Their creator combines youthful dash with rare wisdom, humor and an eye for the unexpected.

No wonder this debut collection won the Grace Paley Prize in Short Fiction; she got her chops the old-fashioned way: she earned them, publishing thirty stories in various venues over a decade, including the title tale here in the Salman Rushdie-edited “Best American Short Stories 2008”; the story had been rejected nineteen times. These are her bona fides for teaching writing and literature at DePaul.

Meanwhile, she accumulated the life experience—largely in Chicago, as these settings intimate—to seem to inhabit the complex warp and woof of the relations of couples whose age differences span as much as a generation. Moreover, she seems to have learned something about why relationships do or don’t work—and is humane enough to manifest that judgment without being judgmental.

In “Twelve + Twelve,” for example, she writes of young Brynne, who becomes the “other woman” in the life of Griggs, a successful consultant who is her father’s old college friend. The man and his ex-wife lost their own daughter to a car wreck, and she struggles with the twin challenges of making peace with the woman who has replaced her in her ex-husband’s affections, as well as grieving the death of their daughter.

Brynne and Griggs begin as friends and end as lovers. (The story title alludes to their age difference, less daunting to Brynne in the additive form.) Generally sensible, the husband yet stands aside as his ex-wife engineers a meeting with Brynne to ostensibly smooth the waters. But the unlikelihood of its broaching both friendship and grief—and the ex-wife’s possible hidden agenda to put Brynne in her place—make the reader cringe. The outcome, with an unexpected turn, yields insight into the emotions of all involved.

In “Interview with the Second Wife,” the grieving longtime younger partner (not really the wife) of a noteworthy, recently deceased author is debriefed by an academic working on a dissertation about the author’s work. Told by the partner more than a decade later, it is a story framed by memory and addressing lingering questions of personal identity, hierarchy, reputation and, yes, grief—and also the complexity of the young woman’s attraction to the academic at the time. That this is communicated absolutely engagingly demonstrates this author is no newcomer.

The final story, “Walled City,” speculative and allegorical, seems almost a speed bump after the more down-to-earth pleasures of the previous nine tales. But it is funny, and it underlines the fact that if this collection is not always perfect, it is always perfectly smart. (Martin Northway)

“Portraits of a Few of the People I’ve Made Cry”
By Christine Sneed
University of Massachusetts Press, 166 pages, $24.95

Christine Sneed reads February 9, in a “Straight from the Heart” reading with Gina Frangello and Julia Borcherts at Women and Children First, 5233 North Clark, 7pm; and February 16, in a Local Authors’ Reading with Rebecca Johns at The Book Cellar, 4736 North Lincoln, 7pm.