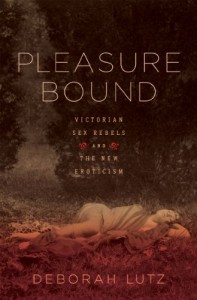 With a sumptuously descriptive and intelligent prose, Lutz takes you on a tour of foggy, late-night 1860s London—where sex was easy to come by and curiosities such as flagellation brothels, male-with-male sexual encounters and prostitutes of differing ranks flourished. The author identifies the major “sex rebels” of the day: the eccentric poet-celebrity Algernon Charles Swinburne, a man with a penchant for flogging and the study/exploration of sodomy and lesbianism; the painter Dante Gabriel Rossetti, who demonstrated his obsession with the sexual aspects of death and melancholy by exhuming his dead wife’s interned body, already seven years in the ground, to retrieve a manuscript of poems; and the ultra-masculine world traveler Richard Burton who, with the Kama Shastra Society, published the “Kama Sutra” in 1883, eighty years ahead of his time.

In plumbing the underground sexual frontier of 1860s London, and the players who dared to experiment with sexual expression before terms such as “masochism” existed, Lutz shows how the freewheeling, libertine sophistication of these characters is still something to learn from. In the manner of a Dr. Ruth, Burton urged Western men to “recognize the female orgasm” and pointed out the importance of arousing sexual passion in pleasing a woman.

Over discussions with supper clubs such as the Cannibals and the Aesthetes, the sex rebels protested the Church of England, and the hypocrisy of double-life England. Gender, religion and sexuality were the main topics of discussion and, as a result, sex, heretofore shrouded in secrecy and shame, later became infused with possibilities.

Through meticulous research and wickedly entertaining anecdotes, Lutz illustrates how the sex rebels’ exploration and challenge of taboos in the 1860s eventually morphed into the sexual categorization of the late-nineteenth century. By grouping people into such categories as “homosexual” and “fetishist,” although stigmatized, these groupings ultimately gave an identity to a class of people that could demand rights in later centuries.

Yet despite defining how the sex rebels made sexual identity possible, Lutz sticks to her thesis of transgender, which in this context means: “to claim rights as a free person and citizen, not a person who fits into the rigid box bounded by such words as lesbian, gay, transexual, or even man and woman.” In other words, the sex rebels were defining sex minus the hindrance of classification. Rather than over analyzing your sexual impulses through contemporary lenses—magazine quizzes, talk shows and psychoanalysis, or even gender, for example—Lutz suggests to keep the covers on, enjoying the beauty and mystery of not categorizing. (Marla Seidell)