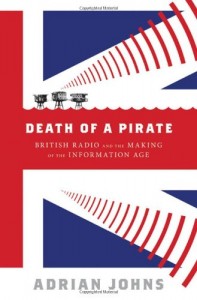 In the late nineties, Tom Standage wrote a book called “The Victorian Internet,” demonstrating how much of the irrational exuberance associated with the early days of the internet (and concomitant forecasts of utopian social transformations) had also accompanied the early period of telegraphy. Now Adrian Johns, a professor of history at the University of Chicago, has come along with a highly readable tome that shows how the current battles about intellectual property and information (which may or may not want to be free) have parallels both in the early British radio and in swinging sixties-era pirate radio stations.

Johns starts his book with one of the strangest, bloodiest and most piratical of moments in British pirate radio: the killing of one of Britain’s leading radio pirates Reginald Calvert in 1966 by his erstwhile business partner Oliver Smedley. Johns’ account of the evening reads like a prime detective story. He sets the scene beautifully: a quiet midsummer’s night, on the far outskirts of London. A mysterious car (a Zodiac no less) drives up to a cottage, Smedley’s cottage, it turns out.

Calvert knocks on the door to the cottage. The knocks are answered by one Pamela Thorburn, Smedley’s “housekeeper, assistant, and occasional mistress.” Agitated, Calvert bursts into the cottage, looking for Smedley; Calvert wants to take him to the police. Thorburn tries to reason with him: “go and bring a policeman here.” Smedley meanwhile has ducked out of the room; he returns a few minutes later, armed with a shotgun; moments later a blast leaves Calvert lying on the floor, oozing blood.

Most of Johns’ history is not written in the overheated, film noir style of his prologue—and that is a pity. Because Johns’ Cambridge-educated even-voiced, evenhanded style is great for an even-voiced, evenhanded history. But for those looking for spice in their prose, most of Johns’ book never lives up to the tabloid promise of the first chapter.

Instead, Johns delivers an informative, respectable account of the battle between those who, from its beginnings in the early decades of the twentieth century, wanted radio to be a free, freewheeling medium, open to all sorts of experimentation. And those who, fearing radio’s power and potential for catalyzing social change, attempted to fence in the once wide-open electromagnetic frontier.

The same battle took place in the USA, with slightly different results. Here radio was commercialized, and most control handed over to station owners and ad agencies, with some oversight from the FCC.

In Britain, control, at least for broadcasts within the UK, was turned over to the BBC, a public-service broadcaster with a distinctively elitist, non-commercial (even anti-commercial) mission: to reinforce the values of British high culture while lifting the lower classes morally and intellectually (or at least preventing what the powers-that-be at the BBC saw as the moral and intellectual decay that American-style commercial radio fostered).

Johns recounts various attempts by rogue stations, before WWII, to break BBC’s monopoly (many of these stations were located on the continent with broadcasts aimed at the UK). He then fast-forwards to the sexier proliferation of pirate radio broadcasters in the 1960s.

Pirate radio stations, the most famous of which were located on abandoned oil-rig-like marine forts in the seas around Britain, were buoyed by a teen culture only fitfully represented on the BBC and changes in technology (in particular the transistor radio) that made radio a more portable, harder-to-control medium. It was also spearheaded by a generation of promoters and entrepreneurs who had been toughed in the free-spirited world of early rock ‘n’ roll. A free-market world where supplying demand was not the most important thing, it was the only thing that governed decisions.

That’s not to say pirate radio was without ideological roots. As one might expect from a professor at the university that spawned “the Chicago School of Economics,” Johns takes care to map the free-market ideas behind the more prominent pirates (include the above mentioned shotgun-wielding Smedley). Friedrich von Hayek, and his seminal book, “The Road to Serfdom,” even make an appearance.

In the end, Johns makes a fascinating observation, dividing radio pirates into two kinds, the freewheeling revolutionaries who really pushed the limits of the medium and the ones driven to piracy by unnatural limits placed on the current system. Calvert belonged to the first group, Smedley the second. Johns makes it clear that it seemed inevitable that the two would first work together, then clash, though violence was not inevitable. Or even wanted.

Calvert’s death, as Johns observes, hastened the authorities’ clampdown on Britain’s radio pirates. Though it also, ironically, ushered in a loosening up of the stodgy BBC, and the appropriation of many of the ideas and techniques (and even some of the on-air talent) of the radio pirates. It was ever thus. Yesterday’s pirates become today’s merchants.