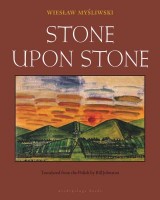 In the anti-Communist movement in Poland in the 1980s, the word “Solidarity”—“Solidarnosc” in Polish—was emblazoned in red, streaking letters across posters and banners. Soon it was followed by an even more powerful script, that of “KATYN” with the “T” as a cross, Christ’s image with thorns across it.

Under Communist rule, Poles were forbidden to mention the Katyn forest, where Soviet soldiers massacred and buried thousands of Polish officers in the opening weeks of World War II, when the Germans and Russians were still allies. But with Solidarity the cat was out of the bag, and for Poles no image is more powerful and meaningful than the Crucifix.

Forget plot; great books don’t need it. Rather, here modern master Wieslaw Mysliwski reveals the life of a man and the lives he touches through accretion—not chronologically yet word upon word, “stone upon stone, on stone a stone,” in the words of the protagonist’s favorite Polish folk song—with the greatest secrets lying deep within, like the family tomb reluctant farmer Szymek Pietruszka still has not finished.

A deeply flawed man—a “young falcon,” says a sympathetic older woman in the midst of World War II, “not made for the happiness of one woman, but to bring unhappiness to many”—yet a close observer of people, and a listener and almost-confessor who fosters the unleashing of torrents of words yielding sudden, stark insights into their speakers, as well as, in those words’ unguarded quality, both conscious and unconscious dark humor. It is a special humor cultivated by a rural people stubbornly clinging to Catholicism for a thousand years, throughout sequential invasions by outside peoples. “The giddy Poles,” the Russian author of the Cossack saga “Taras Bulba” called them; among Slavs, it’s all relative.

The latest incursion, of course, was the Germans and then the “liberating” Soviets, who wouldn’t leave. The second of four brothers of a farming family, Szymek couldn’t wait to get off the farm yet, in the long run, failed to escape. Before the war he was a policeman, during the war he was the “Eagle,” a resistance leader fighting the Nazis. Afterward perhaps he could have made capital of this, instead settling for an occasional knowing nod and a drink of vodka.

Even in the midst of occasional interludes from combat, Szymek’s father was merciless in his assessment of his son’s intentions, accusing him of selfishness in fighting to avoid working the family’s farm. Wounded multiple times, witness to the most horrible atrocities, on one occasion Szymek miraculously escapes a mass execution. Years after, officials erecting a monument to the victims’ memory are in a quandary about mentioning the lone survivor Szymek; with absurd logic, they try to persuade him it makes best sense simply to include his name: “To say someone escaped was like he’d knocked off a piece of the cross. Or at least spoiled something.”

Szymek’s mother tells them to go away. “He doesn’t need to be on a memorial, he’s at home, thank the Lord. I cried my fill for him back then, why should I have to do more crying? … You say something as well, father!”

So Szymek’s father asks them, “So how’s the weather over in Borowice?”

“What kind of father are you!” Mother shouts.

“The thing is,” he mumbles, “if he thinks he was killed he won’t feel like working. And there’s no end of working here. …”

For some years, Szymek is able to flee into petty Communist officialdom, ultimately doomed by his own lack of respect for authority and his unwillingness to adopt the veneer of a nonbeliever—even though he seems as reluctant a Catholic as a farmer. The other brothers disappear into the city. The oldest, Michal, finds his fortune in a mysterious way, reappearing only at long intervals.

Tacking through turmoil, Szymek avoids commitments of all sorts while insisting on living from day to day. Thus his humor remains intact; wandering a land of crosses, he never prays for assistance. Even in deep misery, collapsing in the rain under the image of Christ at a shrine, he notes, “The rain not only didn’t let up, it fell harder and harder… So I sat there in the rain taking swigs from the bottle, and I even started feeling good. I talked a bit to Jesus, who was sitting above me under his little roof, his chin resting on his hands pondering.” Ultimately Szymek leaves, explaining humbly, “otherwise, [ Lord,] I’ll start pondering like you when you and I aren’t equal.”

Szymek emerges as close an observer of nature and the seasons as any willing farmer, and because he has been paying attention, of life as well. These pages are full of rich lore only an agrarian can know, parables slyly masquerading as the finest storytelling, and secrets of everyday suffering people to which only the truly sympathetic is ever privy. In the end, the prodigal Szymek, like Poland over and over again, takes up his cross with a sardonic smile on his face. And as for this “Stone,” you will not want to put it down.