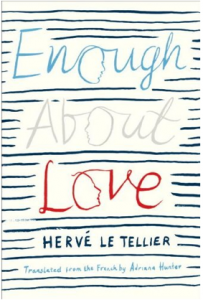 Disregard the title. “Enough About Love” by Hervé Le Tellier is all about love. This is not a book for the cynics or the bitter broken-hearted. “Any man—or woman—who wants to hear nothing—or no more—about love should put this book down, ” Le Tellier states in the prologue. A wise warning; the story that follows is one that examines the struggles of a modern marriage, that discusses the intoxication and toxicity of affairs, all the while analyzing and philosophizing about—what else?—love.

Le Tellier creates a sophisticated cast who form the love quartet at the center of this novel. There is Anna, the fashionable psychiatrist who hasn’t quite gotten over the fact that the most reckless years in her life have ended by way of marriage, motherhood and turning thirty. Thomas is Anna’s analyst, a man whose first love threw herself under a train, a man who managed to turn his grief into ambition, and became what few expected of him: a professional. There’s Louise, a successful lawyer who knows her husband too well; to her, he no longer seems like a husband but rather a brother, and yet that, too, is not quite the right word. She doesn’t know what her marriage has become, and then Thomas comes along and reminds her what a marriage should be. And finally, Yves, a writer of the bohemian sort, who has spent much of his life running away from his family and a father whom he does not love. He falls in love with Anna, and in the few months of their relationship, writes a book for her.

Le Tellier’s prose is beautiful in its simplicity, its honesty. “He wants nothing and no one to obliterate the note he can still hear inside, to disturb the color she has set down in him” he writes of Yves’ struggle to resume life after Anna leaves his apartment. Sentences are often short, speaking volumes with their brevity: “Anna tries the dress on. It fits her well,” describes, hauntingly, Anna’s feeling of claustrophobia for the marriage she refuses to leave, and reveals the true impulse for her clothes-shopping addiction. Le Tellier’s choices in form—emails, pages from Yves’ book, a script of an academic lecture, footnotes that detail Jewish parables, tour-guide pamphlets—excel at breaking up the narration. Sometimes witty and humorous, sometimes tragic and serious, “Enough About Love” is a lot like love. Both leave you wanting more. (Naomi Huffman)

“Enough About Love”
By Hervé Le Tellier, translated from the French by Adriana Hunter
Other Press, 231 pages, $14.95