by Brian Hieggelke
March 1, 2011Filed under: 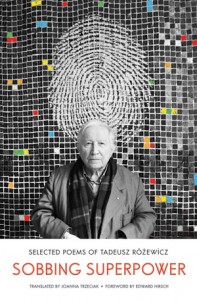 A poet of dark refusals. A naked, impure poet. A poet speaking from the margins. These things, writes Edward Hirsch in the foreword for “Sobbing Superpower,” make Tadeusz Rózewicz a poet brimming with uncertainties, a “bemused seer of nothingness.”

Lesser known by American audiences, Rózewicz is a Polish poetry heavyweight, his writings filled with postwar contemplation and breathless urgency, an escape from the constraints of formal poetic traditions prior to the Holocaust. World War II thematically blankets the beginning of “Sobbing Superpower” as Rózewicz explores, reimagines and escapes death. In the opening poem, “Rose,” he writes:

Rose is the name of a flower
or a dead girl

His sharpness and ability to communicate intense ideas with a raw, almost unemotional voice allows for several reinventions throughout the book. The reader innately believes the narrator’s deep-rooted investment in his life and the lives of others. Rózewicz’s commitment to capturing the tension of writing poetry post-World War II and his distrust of “superpowers” in politics even seems to increase with time. In the later sections of the book, the writing moves towards the surreal, and an engagement with the changing social culture around him. In the long poem “recycling,” Rózewicz moves in and out of Polish, German and French (among others) cultural references. He writes:

In part, his cultural revelations are informed by knowledge he gained monitoring German newspapers and radio during the war. As mentioned by Joanna Trzeciak in her Translator’s Note, much of the German presence and resonance in Rózewicz’s work is lost in translation. American audiences only truly experience German influence when Trzeciak refuses to translate bits of the language, instead leaving them untouched or noted in the margins.

The effect is simple and direct, providing the reader with a sense of immediacy and anxiety, but also a moment to reflect peacefully on the sometimes political, sometimes personal subject matter. “Sobbing Superpower” is a collection of work by a man who understood the significance of writing during a new generation in Polish literary history. He rises to the challenge by slipping in and out of reality, twisting and turning with the concept of nothingness and death, and ultimately “justifies nothing/explains nothing/renounces nothing/encompasses no whole/fulfills no hope,” therefore providing the reader with poetry that “loses against itself.” In this struggle, Rózewicz builds a bridge between what can be described and the things of our consciousness that can only be felt. (Kelly Forsythe)