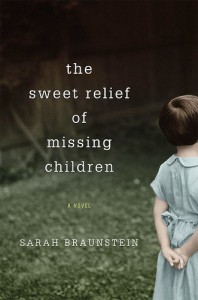 There are many ways a child can go missing. When 12-year-old Leonora is kidnapped, a search party spans all of New York City. A young man who goes by the name of Pax runs away from his mother and her new husband, but she isn’t the type to launch a search party. Judith follows a sweet-talking songwriter to a hotel room, and emerges a week later with a cigarette burn on her belly and stories she won’t ever be able to share. And Sam, the only survivor of the tragic accident that killed his entire family, is an orphan, a boy who will grow into a good man, but will always wonder if his mother meant to crash into that oncoming train.

At more than 350 pages, “The Sweet Relief of Missing Children” is a substantial debut novel, but movement is fierce and swift. The division of the novel into six parts (each signifying a leap in time), and these parts into chapters, speeds things along. Braunstein’s writing is richly poetic, bringing to mind the prose of Pulitzer Prize-winner Elizabeth Strout. Objects and people are often portrayed in a state of disintegration, of collapse: “[The house] was collapsing in its slow, powdery way, outside and in, bricks crumbling, foundation rotting, the roof patched with tar paper,” Braunstein writes of the ramshackle cottage Pax (then Paul) shares with his mother, Goldie. These metaphors, though unremarkable, are made original by language and syntax. There are times when Braunstein is guilty of over-writing, of attempting sentences like, “The boy’s face was not a face anymore but a mirror for Thomas’s doubt,” that I suspect fall short of what she intended.

The only other notable weakness is the novel’s lack of setting. Buildings and rooms are often very beautifully realized, but the fictional towns of Copper Junction and Beetle are so underdeveloped that they seem to float above the story instead of existing in it, wobbly and transparent as a mirage. As a result, the stories seem a bit rootless, but not distractingly so.

These characters’ childhoods are connected by tragedy, their lives by their search for a love that will redeem them. “The Sweet Relief of Missing Children” explores the human impulse to run away, to reinvent, to discover the people we were meant to be.