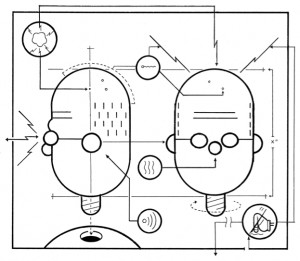 “There are two sides of comics that are always competing: the text and the image, ” says Ingrid Olson. If last year’s Comic Symposium of Chicago emphasized the image, this year’s successor event hones in on the word when School of the Art Institute hosts its second annual Small Press and Comics Symposium (spandcsc.tumblr.com) March 24.

Organized by Olson and other SAIC alumni, the event features two panel discussions with ten Chicago presses and comic artists aimed at exploring the connections between the small press, independent publishing and comics communities. Moderated by University of Chicago comics scholar Hillary Chute, the comics discussion will include Chris Ware, Onsmith, Corinne Mucha and Aaron Renier, and will tackle such questions as the “changing cultural status of comics.” The Chicago press discussion features panelists from Front Forty Press, Featherproof Books, Green Lantern Press and Poetry magazine, and is moderated by publisher Sally Alatalo. Both panel discussions are free and open to the public.

Last year’s event addressed the status of comics in academic art. By bringing the publishing side into the spotlight, Olson says she hopes to illuminate the “serious” DIY mentality of these two creative communities. “We view small presses and independent publishing as a larger umbrella, and comics as a faction of it,” she says. “Hopefully switching focus from last year will provide a full spectrum of comics as well as interject different modes of publishing into the conversation.” (Benjamin Rossi)