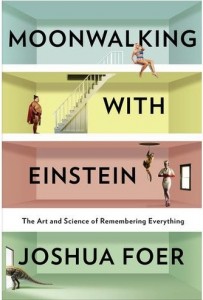 “Moonwalking with Einstein” contains no less than the secret to improving your memory, but it’s not a self-help book. It’s an exploration of what the memory is, how it works and how it’s been viewed throughout history. The secret was common knowledge until modern technology, like the printing press, made it obsolete. Joshua Foer (brother to Jonathan Safran) was inspired to research the subject after stumbling upon the bizarre world of memory champions. Over the course of a year, Foer studies what a memory “athlete” remembers and how they do it.

In this fascinating journey, Foer develops his own remembering skills with the guidance of the world’s best memorizers. From these geeky champions, he learns the tricks to cramming long lists of random words and numbers into his brain. The most popular is the centuries-old technique of the “memory palace,” an only mildly tedious practice that involves turning each item into an absurd image and placing it in an architectural space in the mind. Foer’s explanation provides the reader with the ability to begin memorizing grocery lists almost immediately.

Foer interviews subjects with naturally extraordinary memories, people without innate talents who “merely” train their memories, and a few people with no memories at all. These infinitely interesting characters provide insight to the mystery that is our memories and how they are stored.

In the course of his research, Foer becomes a memory athlete himself and in one year actually wins the USA Memory Championship. Despite the fact that he can memorize the order of several stacks of shuffled cards, Foer is quick to point out that while he officially possessed the best memory in the entire country, he still forgets things just like the rest of us—where he left the keys, or why he opened the fridge. The one question Foer has the most difficult time answering is why anyone should even try to increase their memory capacity. When external memory-holders (modern technology like our phones, computer databases and even the records of our lives kept on Facebook or Twitter) suffice, at least, fairly well, what’s the use of semi-laboriously creating a memory palace? Even faced with that daunting bit of reality, the promise of improving the memory a little bit is compelling reason enough to read this wonderful first book. (Kelly Roark)

“Moonwalking with Einstein: The Art and Science of Remembering Everything“
By Joshua Foer
Penguin Press, $26.95, 320 pages