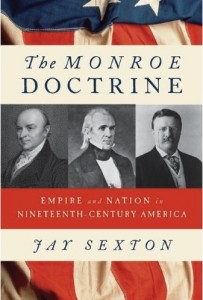 University of Oxford scholar Jay Sexton’s thoughtful, solidly analytical examination of almost a century of subsequent foreign policy convincingly demonstrates why the 1823 doctrine expressed by President James Monroe cast such a long shadow in our politics—and is likely to continue to do so as long as the United States remains a world power.

Its staying power has been extraordinary, acting as both an accelerator and a brake on American international expansionism. Ever since the nation’s establishment, there have been disagreements about the proper projection of American power in the world. But, Sexton underlines here, the Monroe Doctrine has consistently fostered a seemingly contradictory yet persisting notion that Americans can achieve a distinctive “empire” that rejects the kind of colonial imperialism we ourselves sought to escape in 1776.

Fearing French intervention in freedom-seeking Spanish America in particular and European interference in the western hemisphere in general, Monroe asserted through his “doctrine” the U.S.’s intention—militarily if necessary—to resist any European nation’s attempt to colonize the Americas. Ironically perhaps, Monroe sent this warning at a time when our nation’s wherewithal to back it up was limited, made possible by a fleeting diplomatic rapprochement with Great Britain herself.

In the following decades, our national parties traded roles in asserting expansionist impulses and opposing attempts to colonize additional territory. Yet at all junctures of nineteenth-century conflict between these contrary ideas, the end result has been internal political compromise enabling increasing American power and, often, territory.

The Mexican War, for example, manifested the South’s desire to expand slave power, but its mostly northern opponents went along with the ultimate acquisition of West Coast territory—in addition to greater New Mexico—because it more firmly anchored the U.S. against European designs upon North America.

When expansionist Republicans sought to expel Spain from Cuba—and elsewhere in the world—through the Spanish-American War, anti-imperialists like Grover Cleveland, Mark Twain and even Andrew Carnegie protested vociferously, citing the Monroe Doctrine’s “imagined tradition of nonentanglement and unalloyed anticolonialism,” in Sexton’s words.

But American victory fostered disarray among anti-imperialists, paving the way for the Senate to OK a treaty annexing the Philippines, Guam and Puerto Rico; meanwhile anti-imperialist sentiment found expression in accepting the new Cuba as a kind of “client” republic of the U.S.—an independent nation agreeing to certain limitations in American interests—instead of becoming an American colony.

History would speak to American folly in both the Philippines and Cuba, but U.S. power increased even as American political opponents each put their own spin on the Monroe Doctrine. The Doctrine’s 1904 rearticulation as President Theodore Roosevelt’s Corollary revealed the U.S. was, to quote Sexton, no longer “an insecure grouping of former colonies … [but] a great power with self-imposed imperial duties.

“Herein lay the great irony of the Monroe Doctrine: its anticolonialism and idealism—its enlightened call for a new world order premised upon noninterventionism, republican self-government, and an open world economy—justified and empowered an imperialist role for the United States in international affairs.”

Small wonder the Monroe Doctrine has proven to be the Energizer Bunny in American foreign policy debates. In its various aspects, it continued to resonate in policy debates over confronting the international designs of, among others, the Germans, the Soviets, Arab states and radical Islamists. (Martin Northway)

“The Monroe Doctrine: Empire and Nation in Nineteenth-Century America”
By Jay Sexton
Hill and Wang, 300 pages, $27

[…] Doctrine: Empire and Nation in Nineteenth-Century America (Hill and Wang, March 2011). Discussed at Newcity Lit and the Weekly […]