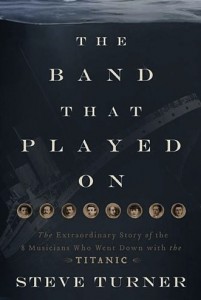 Much has been written about the Titanic over the 99 years that have passed since its tragic loss in the North Atlantic in the spring of 1912. Nearly every account (including James Cameron’s 1997 film) includes the story of how the band led by violinist Wallace Hartley “played on” until the very end when the ship was well into the water—and the lifeboats were all gone.

However, little is known about these musicians—who they were, where they came from and why they kept going in spite of the fact that they must have known that their own existence was coming to a close. That biographical vacuum has been filled by music journalist Steve Turner’s “The Band That Played On,” a brilliant tome that tells us the life story of these individuals from their beginnings in Liverpool, through their short careers and ultimate legacy.

Turner wastes little time with the well-known history of the liner itself, instead piecing together every possible detail about these men’s lives culled from century-old newspaper accounts, census records and earlier research by authors like Walter Lord, the author of “A Night To Remember,” one of the most complete accounts of the disaster.

But Turner goes further, even unearthing a brief account of the life story of the sole direct descendant of one of the musicians (the others died childless), a brave woman who went on to become a respected publicist for many English film stars. He also follows the mystery of the disappearance of Hartley’s violin, which was found in its case strapped to his body but had vanished by the time his father signed for his body a few weeks later in Canada and the questions involving its possible reappearance in 2010, when it was speculated that Hartley’s former fiancée somehow got ahold of the instrument, perhaps keeping it as a personal heirloom that was passed on to her family members.

And then there’s the question of the last tune the band played as the Titanic made its final plunge. Was it in fact “Nearer My God To Thee,” as it was reported by some survivors and used in Cameron’s film? Turner seems to believe so, since evidence shows that it was a favorite of the bandleader, even if it was not a song that was actually included in the White Star Line music book. (Ernest Barteldes)

My grandfather (Hartley sharpe) born in colne say 1895.
the hartleys sharpes were i believe were related,we lost touch with the family when we moved to australia to live in 1949,do you have more details that we could share?
regards jim sharpe

I would enthusiastically recommend this book; It is easy to get lost in the overall tragedy and forget the individual lives and stories of the people who died. I believe it is a unique contribution to the Titanic canon and is especially apropos now, as what seems to be the violin of Wallace Hartley has recently been discovered and is undergoing tests for authenticity. It could be the single most important artifact related to the Titanic discovered thus far. Here is a link to the Amazon page for The Band That Played On, if you’re interested: http://dld.bz/SM8u