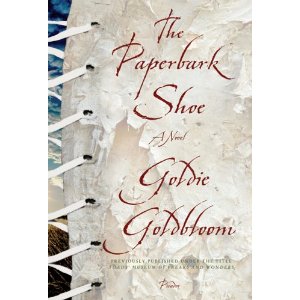 There are a few curiosities about Goldie Goldbloom’s first novel. It was first published in a small run in Australia, and then in another small run in the US under the title “Toads’ Museum of Freaks and Wonders.” The book won the 2008 AWP Award for the novel, a surprise to Goldbloom, who didn’t know her editor had submitted it. Now the book is released in paperback under the original title, “The Paperbark Shoe,” with a slightly distracting line in the author’s bio that she’s the mother of eight children. All that trivia is quickly forgotten when reading this remarkable debut novel.

The story surrounds a woman, Gin, living in the outback with her two small children and a hateful husband, Mr. Toad, who steals food off her plate and her egg money as well. Partially inspired by the historical events of the late 1940s when Italian prisoners of war were sent to live on Australian farms, here two Italians arrive at the farm to provide cheap labor at a time when able-bodied men are scarce. Initially the Toads fear they’ll be killed in their sleep by these sensual, blood-thirsty Italians, but instead they become a part of their family, eating and working beside them, helping them to raise the children.

“The Paperbark Shoe” is a tale of otherness. Gin, an albino, pianist and a well-educated young woman from the city is an outcast in Toad’s small town. Eager to escape a painful past, she tolerates her illiterate, unmannered husband and the mockery of the rough townspeople. Nonconformity is not accepted in this insular community, neither Gin with her white skin, Toad for his short height and various proclivities, certainly not the Italians, nor the Aborigines, always on the edge of the town, but never a part of it. Others are treated like circus freaks, openly gawked at, merely curious objects for consumption.

More than once, Gin spies eyes peering through keyholes to glimpse the entirety of her white flesh and hair. Her body is a sight of unwelcome attention and touch. Even to herself, it is hideous. One of the Italians, Antonio, recognizes her beauty, “like the Maria in the church, smooth white marble, perfect.” While Gin resists the affections of Antonio, Toad more brazenly begins a relationship with the other soldier, further ostracizing them from the small-town society. The unloved, mistreated Gin is a likable character despite her faults. Starved for affection most of her life and treated as an oddity, she’s completely disassociated from her own feelings. She does her best to avoid thinking about her pregnancy, the infidelity of her husband, and her own desire for Antonio.

Goldbloom’s language is beautifully poetic, whether she’s describing skinning rabbits, the death of a child, or the desires of the heart. Of lowly cows, she writes:

Their long mauve tongues stretch out endlessly, wetly, prehensile. In the low slanting light of dawn, the great swathes of spider web bunched from the beams glow golden and luxurious. The fly tapes twisting over the cows’ backs seem like black lingerie, the cows warm and fertile, the splash of manure in the gutter smelling of the summer grass. It is silent except for the rhythmic grinding of the grain between cows’ teeth.

Less gifted writers would surely veer into corny sentimentality, but chaste moments shared between the lovers are unbelievably romantic.

Gin is a prisoner as much as the Italians are, and just like them, no bars or prison walls contain her. It is only when the effect of the war finally makes its way to their remote area that some of these characters are able to claim accountability for their lives. Goldbloom masterfully builds anticipation in this elegant, introspective story. When the reality of war disrupts Gin and Antonio’s fantasy, they can no longer deny their responsibilities. (Kelly Roark)