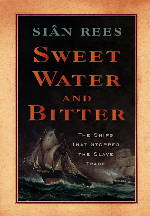 What more can you ask of written history? Oxford scholar Sian Rees’ “Sweet Water and Bitter” is a well-researched narrative of an epic saga little known here—Britain’s attempt to abolish all transatlantic slave trade in the 1800s—interwoven with smashing high-seas adventure worthy of Patrick O’Brian.

Large-scale trafficking of African slaves to the Americas began in the sixteenth century, but the British Empire quickly became the anchor of both the profitable bilateral and triangular oceanic trades, with British ships and British money. The United States and Britain finally abolished the importation of African slaves in 1807, but the United States Navy’s available resources to enforce its law were sketchy at best. But when Britain went at the problem, it did so whole-hog with dedicated maritime resources and with a determination to apply to other powers acceding to abolition the still-controversial mutual-search “right” on the oceans: Britain’s idea that nations might search each other’s vessels to verify adherence to mutually agreed pacts. One false move along such lines could lead to war.

The Brits’ Preventative Squadron of warships not only went about its task with esprit de corps, but with the bold, innovative and conniving spirit of privateers. Take the small scrappy brig Black Joke, for example, which in 1828 encountered the heavily armed pirate schooner Presidente off the West African slave port of Ouidah. The latter sailed at the Black Joke, trailing two of its own captured ships. Lt. William Turner’s Joke hauled down its Brazilian colors and sent up its proper Union Jack, greeting the Presidente, which responded with an inhospitable broadside; the Joke barely barked back, keeping carefully out of range.

The race was on, the pirate captain disdaining the brig as a mere “speck” of a merchant vessel to catch and defeat. Into the night the pirate chased the British brig, “at times less than a pistol-shot ahead, gaining a yard, losing two, gaining, losing. When moonlight illuminated the sea, the Presidente was still on the Black Joke’s tail, but the other two vessels had fallen behind. The contest was one on one…”

Drum beating, the agile Joke turned and began to engage in a “graceful, deadly dance,” firing her single gun accurately while taking grape shot and musketry from the bulkier adversary. Finally, as the pirates poised to board her, the Black Joke fired a single shot that broke the pirate’s boom, brought down her sails and killed her wheel man, and the Joke’s marines went over the side and captured the Presidente.

Such boldness helps explain the Preventative Squadron’s losses over six decades—17,000 to all causes—while freeing 160,000 slaves. The monumental 1999 documentation by David Eltis and others of more than 27,000 slaving voyages with human cargo has yielded an estimate of twelve million Africans forcibly shipped between 1519 and1867—giving some notion of the magnitude of the trade that finally was ended.

“We have spent 20,000,000 pounds to abolish slavery,” the author quotes a British merchant in 1845, “and 20,000,000 pounds more to repress the Slave Trade; yet does no one nation under Heaven give us credit for disinterested sincerity in this large expenditure of money and philanthropy. Whether the calm verdict of posterity will redress this injustice, time alone can show.”

Perhaps empires can only get credit for “philanthropy” when memories of their own injustices have receded. Now that the sun has practically set on the British Empire, the verdict is here. (Martin Northway)

“Sweet Water and Bitter: The Ships That Stopped the Slave Trade”
By Sian Rees
University of New Hampshire, 352 pages, $27.95