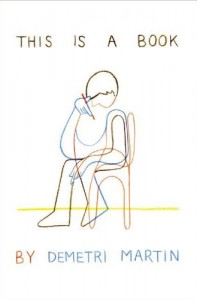 “This is a Book” is the first book by comedian and actor Demetri Martin. An ingenious wordsmith, whose stand-up routines often feature a giant pad of paper that he uses to flip through drawings and words, Martin’s comedy translates nicely to book form. This book recalls the prose collections of Woody Allen—they share a common shtick—absurd stories, terrific one-liners and fairly intellectual comedy that allows the reader to feel just as clever as the writer.  Martin has the ability to create a whole story in just a line, like Hemingway’s famous six-word short-story (For sale: baby shoes, never worn.) only hilarious.  “I have been called many things,” he writes, “Like ‘Hey you’ and ‘Get out of the Way!’ and ‘Look Out!’ And then, some time later, ‘Plaintiff.’” A two-and-a-half-page palindromic story is nothing short of amazing. A diary written completely in acronyms amuses. Martin seems to find particular pleasure in playing the character of the douche-bag—the kind of guy not afraid to insult a pregnant wife, insult an elderly woman, or get into a fist fight. A chapter about a cat calendar for people who hate cats is not cool. Not cool at all. (Kelly Roark)

At DePaul University Bookstore, 1 East Jackson, for a signing on May 12 at 6pm.