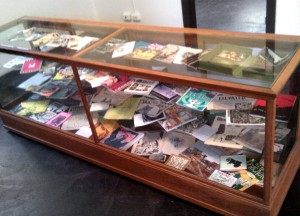 For any other organization, having a Chicago blizzard wreak havoc on a collection of zines and other periodicals, suffering an occurrence of flesh-eating bacteria and moving from one space to another four times or so may be the end-all, but not for the Chicago Underground Library (underground-library.org). In fact, not only do they use their situations to their advantage, but they find the humor in their misfortune. The dioramas of their previous locations made by local artists celebrate the number of occupancies they’ve had, and their upcoming fundraiser at Beauty Bar will make a mockery of winter with a wintry theme on June 24. While CUL is still looking for a new permanent location after the aforementioned blizzard rendered their last home unlivable, they decided to make their collection mobile with “Structurally Sound,” a Pop-Up Library series that focuses on the specific neighborhood in which the exhibit is located. Although this destiny is not what CUL would have imagined for itself, CUL’s executive director Nell Taylor explains that this project consistently forces them to “think about our collections in new ways.”

The Chicago Underground Library was the brainchild of Taylor after she realized she was inexperienced at making contacts and getting involved in Chicago’s literary scene soon after she graduated from Columbia College. Her idea to form an underground library centered on community involvement materialized just over five years ago in Taylor’s apartment with her friends, sorting through her collections of Chicago publications. Since then, the library has grown to be what it is despite unforeseen problems, but also through the community that has always been the central focus. Since its establishment, the library’s material expands through donations and tips from locals from anything from an entire series of a magazine to flyers left as an offering to the library. CUL even makes visits to Chicago schools: “We have stuff that these kids would never be able to find at a normal library,”  Taylor says. These collections, she says, feature “people to aspire to be like, but also everything in-between.”

This is true because the Chicago Underground Library defines “publication” as anything that was created with the intent of public consumption, whether that is an established academic publication, a self-published work or a brochure on a kid’s favorite artist made at school. They all deserve a place in the catalog because each adds to the context, connecting Chicago influences with the pieces of work. In order to adequately represent each item in the library, CUL decided to develop a unique cataloging system. Beyond just accounting for the author, publisher and other typical metadata, the Chicago Underground Library lists everyone and everything involved in the production—this includes the location and even members listed in the dedication. In addition, the entire catalog is available online with the ability for people to add to the story of the piece’s history and to comment and correct any misinformation. In essence, it is a social network that plays with the possibilities and limitations of the internet: the web itself does not have the access to all of the sources or texts that CUL collects, but it provides the opportunity to open up a conversation about pieces of work to broaden the perspective of the cultural setting in which everything is created.

For all of these efforts, overwhelmingly positive response has come from community members in Chicago. The Chicago Underground Library increases its collection through word-of-mouth and donations which in turn act to reestablish communication between people who had not been in touch since they collaborated on that publication. Similarly, recent graduates from Chicago universities consistently reach out to CUL to help connect with Chicago in the same way Taylor had wanted to after her own college graduation. Even beyond Chicago, there has been a positive response to its cataloging methods, with the CUL presenting its catalog techniques in MIT’s Media in Transition Conference, the Humanities and Technology Association and the Illinois Library Association to name a few. “We found other libraries wanting to help or adopt our catalog,” Taylor says, a particularly remarkable development since Taylor and her crew are “self-taught” and were a little self-conscious about their abilities being held alongside well-established libraries. Instead, “people have really embraced it and wanted to help.”