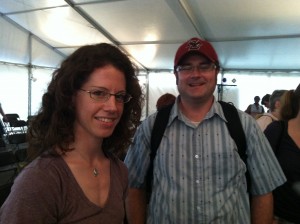 “John, we all like climax, ” David Henry Sterry instructs one of the twenty Pitchapalooza contestants at this year’s Printers Row Lit Fest. “We wanna feel like we should smoke a cigarette when we’re done.” The issue of climax joins comp books, language that reflects the narrative and indicating the arc of the story as recommendations from the panel of judges on how to perfect a story pitch. Sheltered from a thunderous storm by the white festival tent, Arielle Eckstut and guest judge Joe Durepos sit to Sterry’s left as they regard the contestants one-by-one as they present their book pitches behind a podium. “Show us your writing chops,” Sterry directs to another aspiring novelist.

New to Printers Row, Pitchapalooza first began five years ago, but recently returned with a vengeance—there have been about thirty since last October, each balancing pitches ranging between “not very promising” and “truly extraordinary.” Audience members waiting to grab a chance to pitch their book ideas listen intently for their names to be called—not everyone who attends wants to present, and only twenty will. Laughter flutters through the crowd as the next presenter opens, “I hope you all know you’re naked right now.”

Finally the last contestant finishes, and Eckstut and Durepos discuss the contenders while Sterry shamelessly promotes “The Essential Guide to Getting Your Book Published,” which he co-wrote with Eckstut. Together, they are the Book Doctors and offer to introduce the winner to a publisher or agent that fits their pitch; purchasing their book after the show also merits a consultation with them that they say is valued at $100. Past winning pitches have featured a book about the elements of style for fruit trees and an anthology about the Muslim-American dating scene. The youngest winner to date is a 12-year-old with a fantasy novel that is still in the works. With luck, today’s champ will match the success of a few winners: two have either signed a book deal or now have an agent.

Today there are two winners. Adam Sleper’s pitch about living in rural America with a dysfunctional family won the judges over with its use of language and his skill with “bumping up those words against each other” to show exactly what his novel will sound like. Dissimilarly, Margo Gremmler (aka Margo Rowder) presented a dystopian novel named “Thirty Decibels,” which described a world in which the volume of your voice depends upon a birthday candle. “We very rarely have two winners. They were so great, we couldn’t choose,” Eckstut explains.  (Elizabeth Kossnar)