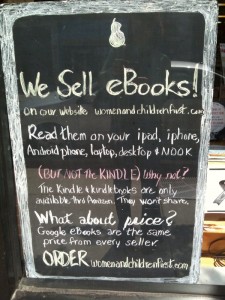 Amazon has become a four-letter word in independent bookstores around Chicago. Linda Bubon, co-owner of Women & Children First in Andersonville, can barely bring herself to speak the name of the e-commerce company aloud in her store. She only mouths it when talking about lost sales to the online giant.

This is the perceived relationship between local bookstores and big business and modern technology: resilient holdovers from an era long past, community nooks that serve only a niche market of collectors and literary snobs, fighting to even tread water as corporate stores flood the market around them. “We’ve never been like that,” says Bubon, whose store was one of the first in Chicago to go online over twenty years ago. “We’ve always tried to be very relevant. But God forbid we don’t sell eBooks. That would just reinforce that stereotype.” Those like Bubon readily admit Amazon has taken a good chunk of their business. And its proprietary device, the Kindle, threatened to slice even deeper into profits and essentially cut them off from the eBook market. So it would make sense for independents to be a bit wary of the eBook trend. But since Google settled a class-action lawsuit filed against Google Books, which paved the way for it to enter the online distribution scene in December of 2010, more than 250 independent stores across the country, including ten in and around Chicago, have begun selling eBooks. Many, like Women & Children First, have made them available directly from their websites, offering them the ability to sell them competitively across platforms.

Unlike the Kindle, which only supports Amazon’s extensive library, Google eBooks allow independent stores to make their curated selections available on numerous devices, like the iPad, Barnes and Noble’s Nook and the Sony Reader. Still, independent bookstores thrive on their community of customers and theoretically would be hurt by the disintegration of that culture.

Yet that hasn’t been the case. While Google reports that Chicago ranks third behind New York and Los Angeles in terms of sales volume of Google eBooks, Bubon and Suzy Takacs, owner of The Book Cellar in Lincoln Square, have both offered eBooks since December, yet they haven’t exactly been a boon for either store. Bubon says Women & Children First have only sold eleven to date, and Takacs says they haven’t seen big returns either. Both have noticed that despite their online customers’ ability to have books sent to their home or directly to a device, many continue making the trip to their stores to pick up their purchases.

“A lot of people buy online from us, but they still choose to come pick it up at the store rather than have it mailed to their home,” says Takacs.

Jeannie Hornung, a spokesperson for Google Books, says this is because the goal of the company’s eBooks division is to simply provide bookstore owners with the technology so they can continue focusing on maintaining their in-store community while providing customers with the broadest possible range of selection.

And though there has been a hesitance from independent sellers and consumers alike—a study published earlier this month by the Book Industry Study Group in New York reported that eBooks currently make up around eleven percent of the total book market, which includes independents and corporate sellers combined, Hornung says it is likely due to this first generation of readers’ wariness of being exposed to an entirely new experience.

“There is that initial fear, and a lot of us from our early childhood love the feel and smell of books,” Hornung says. “There is that hurdle to get over. There’s that fear of technology, but once you get over it you realize how easy it is and how fun it is, and how it can really supplement your reading experience.”

Both bookstore owners agree that technology is nothing to fear. The key, they say, is giving customers reasons to return to the store. Independent bookstores have long been meeting places for like-minded individuals, and maintaining that community aspect is something that’s simply become more important in the last decade. “Bookstores can’t just become showrooms,” Bubon says. Both stores regularly hold book groups, national author events and student readings, all of which continue bringing in customers.

“You can live your whole life online,” Takacs says. “You can get your book recommendations from Goodreads or Booklist, or even through Facebook. Then you can just go online and buy your book. But I have to believe that human connection is important.”

And while neither store is very active in promoting their eBook service, both maintain they see the importance of selling them, both to try and capture customers and maintain relevance once the technology begins to take off.

“I think for most buyers, it’s an either or,” says Bubon. “They like their eBooks. They say they read more. For way too long, Amazon was the controller of what you could read online. And that’s too bad, that the rest of the publishing world let them get that edge. They have made lots of money doing it. Now, we have the opportunity to sell eBooks, and I’m happy to have that opportunity.”