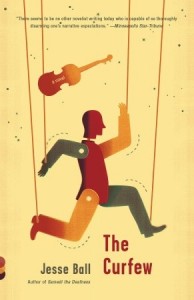 The weirdest thing about Jesse Ball’s novels is how naturally the most unnatural things unfold in them.

An example: In the Chicago author’s second book, “The Way Through Doors,” a young man sees a stranger get hit by a cab and brings the ID-less, memory-washed woman to the hospital.

“Are you her boyfriend?” the receiving orderly asks him.

And like that, the hospital and victim knowing no better, he is.

It’s the kind of organic absurdity that exists in Kafka’s world, and often in Alfred Hitchcock’s. Worlds with the same look and texture as our own but in which reality is a bit weirder, identity a bit looser and circumstance and fate gravity-like forces.

Indeed, that book, and his debut “Samedi the Deafness,” played all sorts of games with the nature of reality and identity and circumstance, and earned Ball due praise.

His new novel, “The Curfew,” may stand as the best of the three, or at least the darkest—a strange, brilliant work of speculative fiction that calls to mind Kafka’s “The Trial,” Nabokov’s “Invitation to a Beheading” and, most prominently, Bradbury’s “Fahrenheit 451.”

Our protagonist is William Drysdale, an “epitaphorist” and father of a mute little girl named Molly. In the dystopian “city of C.,” they try to scrap together a normal life in a society where music has been banned, a strict, yet ill-defined curfew has been enacted and citizens can be captured by secret police and never heard from again.

Obtaining that normal life is a bit tough, however, because one such captured-and-never-heard-from-again citizen is Louisa, William’s wife and Molly’s mother. She was taken shortly after the shadowy, authoritarian government replaced Congress and swiftly changed things.

William, who was once a prominent violinist, now lives quietly, summing up the lives of the recently deceased in single sentences for their tombstone epitaphs and creating complex riddles for the extremely smart and precocious Molly to solve.

His careful existence is challenged, however, when an old friend—a member of a group attempting to subvert the new government—tells him he has information regarding Louisa’s disappearance. For William to obtain this information, he will have to venture out past curfew to meet with the rebels and risk a fate similar to that of his wife.

Ball, an assistant professor at the School of the Art Institute of Chicago, writes here with the rhythm and ear for phrase that permeated the verses in his three volumes of poetry, most recently “Parables & Lies.”

Much of the poetry in “The Curfew” emerges through the epitaphs William pens, such as this one for a 9-year-old girl who was killed by a wayward roof slate, blown off by the wind: “In the street by our house, it was almost evening.”

But one also sees Ball’s poetry in his line by line prose. Small bushes “claim sovereignty” over a grassy ridge; William and his daughter take a rest by “sitting in a dell, surrounded by pale brown stones.” While waiting for her father to come home, Molly creates a puppet show at a neighbor’s apartment called “A Ladder of Rain and the Roof Beyond.”

These are turns of phrase that catch in your head like music, their melody echoing over and again.

What is especially cool about this book is how, while we’re busy being dazzled by his linguistic dexterity, Ball delivers an array of super-heavy, super-ambitious existential, social and meta-fictional insights. All without triggering the flight response many casual readers have to such idea-driven novels.

Close readers will notice some recurring images and motifs running through his first two novels and appearing again in his third.

Both “The Curfew” and “The Way Through Doors” have a scene that prominently features oranges. In “Samedi,” the protagonist James Sim observes a drawing of an elephant being eaten by vultures. In “The Curfew,” Molly hands William a note which reads: “I am an elephant today. I will need to have lots of room and also a bowl of water on the floor.” Much the way the meaning of the “deafness” of his first novel’s title is delayed until very near the end, most of the exposition in “The Curfew” comes from Molly’s puppet show that dominates the last third of the book. The “city of C.,” which seems to be a stand-in for Chicago, also makes an appearance in “The Way Through Doors,” his first novel after taking his teaching position in the Windy City.

Ball also employs the distinctive formal techniques he worked with in those first two novels: dialogue delivered not in quotations, but with a dash; text formatted into blocks, which gives much of the chapters the feeling of vignettes.

While such formal innovations and forays into meta-fiction give the novel a postmodern, experimental flavor, “The Curfew” is much more accessible than those labels would suggest. This is because Ball focuses most of his attention on the family drama at the book’s forefront, and less so on the dystopian backdrop it’s set against.