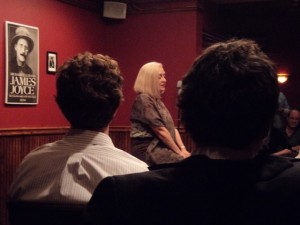 Puddin'heads at the Galway Arms

Matthew Edwards stood in the Galway Arms Irish Pub in Lincoln Park, raised a black glass of stout, and proposed a toast to a boisterous crowd of more than forty on this June 16:

“To James Joyce himself, who, depending on your religious affiliation, is either up in heaven or down in the dirt, laughing his ass off at us for revering his work year after year.”

This is Bloomsday, the annual celebration of the single twenty-four-hour period during which “Ulysses” occurs. It’s a work that attracts such overwhelming interest that it inspired four eclectic gatherings around Chicago this year, and many times that worldwide.

At Puddin’head Press’ seventh annual reading at the Galway Arms, as a planned cast of novelists, musicians, publishers and actors took their turns performing edited sections of the book, the reasons for attendance were scattered. While some were dragged along by bibliophile friends, others, like Lindsey Wallem, have been searching for such a celebration in Chicago for years.

The clear connection among the varied attendees at the Galway, however, was a genuine sense of excitement. Latecomers searched desperately for chairs before taking seats on the floor or leaning against walls. Members of the audience quoted lines along with the performers. Laughter rang out through the second-floor room after choice sections.

Yes, laughter. Despite celebrating a novel that consistently vies with “Infinite Jest” and “In Search of Lost Time” for the title of most daunting literary endeavor, Bloomsday brings out the cheekiness at the heart of “Ulysses,” the reflexive part of Joyce that laughs at his own esoterica.

“So much embedded humor compels the story,” says Jeff Helgeson, playwright, novelist and returning emcee. “It’s a hyperbole of the specific. You take the huge epic tale of the ‘Odyssey,’ and instead of ten years it takes one day.”

The transformation of “Ulysses” from revered tome into living, breathing performance also helps explain the attraction of Bloomsday. “It’s much more dramatic and engaging when it’s being performed than when it’s on the page,” says Wallem, a fan of Joyce’s who discovered the event by chance.

Still, the main reason for the novel’s continued celebration, Helgeson explains, comes down to one factor: the simplicity of its plot.

“You can describe it in one sentence: ‘Get back home,’” he says, before quipping “It’s the same plot as baseball.”

Meanwhile, twenty-two stories up in a penthouse overlooking Millennium Park, eighty-five Joyce devotees gathered to read self-selected passages over dinner and cocktails. Built from a group of students in a Newberry Library class, the Bloomsday Committee’s reading has consistently sold out in recent years.

“Because it’s eighteen chapters told and eighteen voices, you get another level of appreciation when you hear it spoken,” says founding member Mary Murphy of the novel’s appeal, adding that the gathering exists because “people have this idea that it’s this very difficult, impenetrable tome. I think [Bloomsday] helps to break down some of that fear and show that it’s an approachable and enjoyable book to be celebrated.” 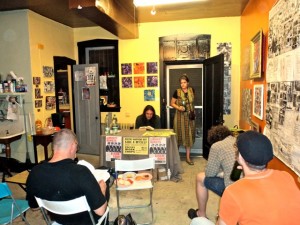 Gathering of the Next Objectivists

Twenty-four hours later—a day late for Bloomsday—the poetry group the Next Objectivists hosted a marathon reading of “Ulysses” inside a small art gallery in Rogers Park. An electric Brother EM530 typewriter in the back was provided to transcribe and reinterpret sections at whim. Behind the gallery was a cooler of whiskey and beer, and a table of meat to rival the meat-centric introduction of Leopold Bloom. While only three arrived to the reading initially, artists and academics slowly trickled in. The smell of charcoal eventually filtered into the gallery as a barbecue was lit out back, where cigarettes were shared and a few sat in lawn chairs, away from the reading.

As night fell, the atmosphere grew more reverent, with the conversations outside hushed as the reading went along. Inside, those filling the gallery listened intently to the quiet recitation of the novel’s poetry.

More than anything else, this year’s Bloomsday illuminated the many sides of “Ulysses.” There’s a reason French philosopher Jacques Derrida called it a “hyper-totalizing” novel. It captures a seemingly endless vision—of science, philosophy, academic debate, limericks, bawdy humor—within the confines of a scant 800 pages. It makes up its own structure as it goes along: It’s a radio play, a catechism and a history of the evolution of the English language. Accordingly, in the events that dotted Chicago on this year’s Bloomsday, the novel became the source material for an uproarious pub-crawl, a penthouse gala and a site of experimentation and reflection.

In other words, the novel does a little of everything, and that seems to be at least partially responsible for the lasting interest in both Bloomsday and the work itself. It is an infinitely versatile text, and each performance of it captures a wildly different vision of Joyce.