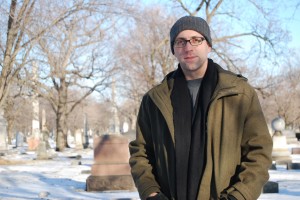 Most modern horror writers look eerily normal. Perhaps that’s one of their best weapons—a disarming countenance that makes them appear more like a member of the local PTA and hides the twisted slant on everyday life. Daniel Kraus is no different. The 36-year-old author’s boyish face rests below a receded widow’s peak, and gives little hint to his macabre sensibility.

The idea for his second book, “Rotters,” came to him in a moment when he was more or less running for his life. While working as a videographer at an NBC affiliate in North Carolina, he was fleeing a hurricane in the station’s news van when he caught a glimpse through the window of a flooded cemetery.

“The torrential rains had made it into a swamp almost,” he says. “And I had this flash of an image of a bunch of guys battling through the mud, trying to get to something that had maybe been loosened by the rain. I thought wow, that’s kind of an exciting, sort of gothic image. And that sort of stuck in my mind for ten years.”

“Rotters” was released by Random House in April, and has already been praised by horror heavyweights like Guillermo del Toro, the director of “Pan’s Labyrinth” and “The Devil’s Backbone,” and famed young-adult writer R.L. Stine. It’s the story of a Chicago teen sent to live in rural Iowa with his absentee father, and is somehow pulled into grave robbing. These are the types of ideas that flow through Kraus’ head on a daily basis, finding the beauty and the horror in the mundane and seemingly trivial. A transplant from Iowa himself, Kraus grew up loving horror. He’d stay up late to watch “The Twilight Zone” with his mother and pen volumes of horror stories in notebooks, having always found something thrilling in the grotesque. From a young age he dreamed of becoming a novelist, but in the decade after that moment at the cemetery a fledgling filmmaking career was getting in the way.

While studying at the University of Iowa, Kraus says he became enamored with the idea of making a career out of filmmaking. It was nothing new to him: he’d shot film shorts with friends throughout high school. But in Iowa, feature filmmaking seemed like “the un-pull-offable.” So after taking the job in North Carolina in 1997, he began documenting Sheriff Ronald Hewett as he policed Brunswick County—a subject he was certain no one would care about. He’d gathered hours of footage and interviews, with no real sense of how to structure any semblance of a story. It was in a moment of pure boredom that he found his style.

It was a murder scene. A dead body lay half out of a car a few hundred yards beyond a perimeter of yellow police tape. He’d shot hours of b-roll. “At that point it was mostly just men sitting around smoking,” he says. He’d exhausted all possibilities zooming in on the body, but still needed to remain on scene for the moment the body was actually brought out. Searching for a way to pass time, he simply began focusing on textures, sounds and colors.

“I focused on the trees and I let them just go for several minutes,” he says. “And I don’t know why, but something about that just clicked with me. This is how it feels to be out here. When you watch that scene in the film, you can’t hear anyone talking, just trees and crickets and wind blowing, and a real sense of boredom. Here’s a dead body, but it’s not that exciting to people who deal in dead bodies. I’d come upon something there accidentally. This isn’t about excitement in North Carolina. It’s how even the most traumatic things in life can be mundane to the right person.” 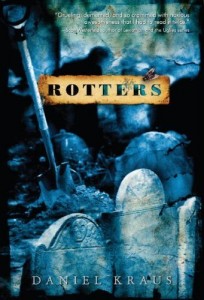 The completed film, which he aptly titled “Sheriff,” debuted on PBS’s “Independent Lens” in 2005 and led to widespread acclaim and comparisons to vérité master Frederick Wiseman. It ultimately helped birth his cinema vérité-style “Work” series for “Independent Lens.” But after three more entries for “Work”—”Musician,” “Professor” and the soon-to-be-completed “Preacher”—Kraus says he struggled to admit to himself he truly desired to return to his long-neglected passion for novels. Since then, he published his first book “The Monster Variations” in 2009, penned “Rotters,” and now says he’s putting himself on a two-year hiatus from filmmaking as his book projects continue to pile up.

“It really was a matter of just rediscovering what I wanted to do.” Kraus says. “I think in a way I was sort of sowing my oats. There’s a bit of an ego rush when you’re doing a movie. You’re sort of in charge of a crew, and people are doing what you’re saying. But in my mid-to-late twenties, I was feeling it but it took me a few years to admit it, was the pull back to what it was I always wanted to do. I’m not an old man yet. I still always wanted to try this. So I did.”

Not every filmmaker is an author, and not every author is a filmmaker. But while Kraus seems to bounce between the two with ease, he’s found his “one man factory” method of production doesn’t work in the publishing world, where a writer might constantly deal with reams of editors notes and page upon page of outlines. He admits to being a bit of a control freak, and his singular process of filmmaking has become more relaxing.

“There’s no mistakes,” he says. “I’m not spending anyone’s money. If one of these films fails, it doesn’t really matter. I wouldn’t really care.”

Kraus admits he’s lucky to essentially focus solely on pet projects, though some might call his work ethic “troubling.” Four documentaries, with another in the pipeline, one feature film—a movie he wrote and directed in 2003 called “Ball of Wax”—and two published novels before the age of 40 is an impressive output, regardless of how he is willing to measure his own success.

“I may or may not have talent,” he says, “but one thing I’m very good at is focusing, and working really hard.”