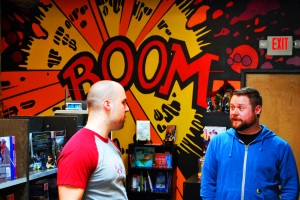 Nicholas Idell had been working at comic book shops in Chicago for a few years when he finally decided to strike out on his own. The 29-year-old Rockford native didn’t want to limit himself. He considered moving back home from Andersonville, knowing there was an open market in Rockford. At the behest of friends, he scouted areas in Washington D.C. and California. Ultimately, he settled, quite literally, in a back alley.

Opened just last month, AlleyCat Comics is squeezed in the courtyard behind a Potbelly and Starbucks, and accessible only through a gated alley no wider than a yard or two on North Clark. A handmade metal sign forged by Idell’s dad is the only signal to sidewalk traffic that it’s there. Idell admits he wasn’t floored by the location when it was first presented to him, but fellow owners David Ballard and Tim Harris both had a feeling the secluded spot could be a special one, so Andersonville’s first back-alley comic shop was born.

“We knew that this neighborhood could really use a store,” Idell says. “Everyone loved that space. And I thought, ‘Well, if everyone loves it so much, how much is not having a storefront really going to hinder this business? Or could it help?’”

Hollywood has changed popular culture’s perspective of many classic comic book characters like Batman, Spider-Man and the X-Men. They’re no longer thought of as brain-rotting children’s stories or fantasy hideaways for twenty-somethings stuck in a prolonged arrested development. The last decade saw them gain acclaim as serious stories with cross-audience appeal. But those who actively buy comics have always in part sought them out for privacy and escape. Menton Matthews III, a Chicago-based artist who last summer finished work for San Diego comic publisher IDW’s “Silent Hill: Past Life” series, has already been to AlleyCat and says the isolated, almost secret location is an ideal spot for collectors.

“I think that’s a benefit to the shop,” Matthews says. “I remember talking to a college student who would drive almost an hour and a half from his town to buy comics, because he didn’t want people to see him. AlleyCat kind of adds a private aspect that’s pretty cool, actually.”

It takes a certain amount of gumption to open a shop with almost no visibility to passersby, where the storefront can only be seen from the employee exits of surrounding buildings, and in a city with comic book stores of every stripe in almost every neighborhood. Yet the guys at AlleyCat seem excited about their chances. It could be the simple optimism of greenhorn business owners, but there is something happening in the Chicago comics scene that seems to be allowing ventures like AlleyCat to succeed.

In March, the second Chicago Comic and Entertainment Expo (C2E2) was held, putting two large-scale conventions in Chicago at the bookends of the summer, bringing noted artists and representatives from Marvel and DC to the city along with more national attention. Kasra Ghanbari, who recently collaborated with Matthews on a creator-owned book for IDW (a rarity for the publisher) called “Monocyte,” due out in October, sees the comic book community as finally galvanizing after years of harboring talented artists.

“C2E2 has definitely helped. Bringing big publishers and major, major artists here to Chicago in what amounts to a family-friendly convention has been huge,” Ghanbari says. “It’s kind of a recognition of Chicago as a major comic book scene, rather than just the people here working taking that for granted.”

Local comic interest has been growing, and with it the community of artists and shops has become stronger. In late 2010, Challengers Comics and Conversation opened its Rogues Gallery in Bucktown—an art exhibition space dedicated solely to comic art. The Las Manos gallery held a comic art show in February. And every Wednesday, writers like Michael Moreci, whose book “Quarantined” was released in the United Kingdom and the United States, have been meeting at 42N Latitude bar in Lincoln Square for an open draw—essentially an artists’ networking meet-up.

“Being any sort of artist, a theater person, stand-up comic, writer, whatever, can be a draining existence,” Moreci says. “A lot of doubt, insecurity that is supremely magnified by trying to get into an industry that is very harsh. Community is what really keeps you going. Being able to meet every Wednesday, regardless of what level you’re at in your career, it helps on a personal and professional level. It’s like AA. It really keeps you focused.”

And the guys at AlleyCat have found a similar ecosystem among shop owners. Idell says they’ve received help from shops like Challengers, Chicago Comics and Third Coast Comics—the last two of which are no more than five Red Line stops from AlleyCat. “You would think they’d be leery about us opening,” Idell says, “but they’ve called us up and said ‘Hey look if there’s anything you have a question about call me. I’d love to help a new business out.'”