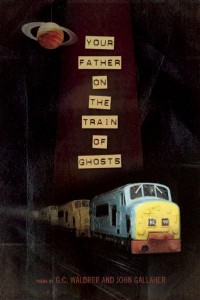 In a sweeping 200-plus poem collection, G.C. Waldrep and John Gallaher tackle an undeniably complicated, expansive subject: this American life. Written collaboratively between a year of back-and-forth emails, “Your Father on the Train of Ghosts” slips fluidly from topic to topic, from the interior of a house (“…and what do we have to show for it / around the dinner table, or the sound like a dinner table”), to the exterior: parkways and botanical gardens, chapels and hospitals.

The book begins with “Automated Town,” a poem which lists a number of familiar situations, people and places suddenly made new by their interactions with each other, and with the determined voice writing them into the poetic landscape. It is this voice, among the mass of American voices it represents, that was most consistent and illuminating.

It’s a room of people dressed
in bright clothes. It’s a room of hanging doors.
Of cell phones and one is ringing. Of people having sex.
Rows of bottles of vodka. Rows of
sparklers. We could go on like this for some time,
so we do. Bugs are flying in and out of the open
windows. All the TVs are on.

With a sturdy assuredness, this voice explores the commonalities we find within our shared physical spaces and places, the imprints left on the objects we interact with on a daily basis. In a web of doors, windows, phones and groceries, Gallaher and Waldrep allow us to see how we can leave impressions on our tangible environments that rival the emotional effects we can leave on family members and lovers after we pass on.

By bringing the inanimate to life, there is a revival of the mundane: “In favor of the present moment, / the bridge is dreaming / or we’re dreaming of a bridge. / Cables in great arcs.”

The fusion of body and object recreates our realities, asks us to question our aftermaths:

So that now
your body is most things
over the city,
in favor of the present moment.

And what are we going to say then?

In “Your Father on the Train of Ghosts,” the ghosts take on a variety of forms, even the shape of two alternative speakers that occasionally slip into the mix, compounding the strength of the “narrator.” These voices tap into a tender energy that often comes off haunting and residual, almost after-the-fact. As readers, we are asked to emotionally reflect on what stays and what most deeply remains: “Our parents, / for instance. We want them / where we can see them, hands up, teeth out. / We want them to remain where they are.” (Kelly Forsythe)

“Your Father on the Train of Ghosts”
By G.C. Waldrep and John Gallaher
BOA Editions, 120 pages, $16