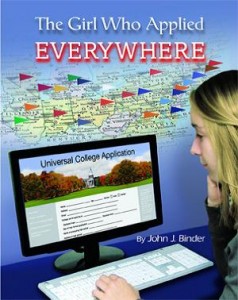 Finally, someone had the courage to write about the unsung privileged elite and the horrors they bear as they apply for the top universities in the world. Too long have they suffered in silence and born the agony of merely attending schools like Northwestern or the University of Chicago when they don’t get into the Ivy league.

John J. Binder, a Chicago author, writes of three high school students in a fictional western suburb, Oak Stream. Sarah, a middle child apparently incapable of making a decision, is the main character.  Her friends Rob and Carrie are her loyal, nerdy friends.  “There had been a few dates for Sarah and Carrie starting in the eighth grade, but the boys found them a bit overwhelming and largely stayed away. Rob’s off the wall sense of humor was the best girl repellent known to man and Sarah’s wit did nothing to help her with the boys either. Although the outside world did not always understand them, they understood each other and appreciated the bond they had forged.”

Sarah, crippled with indecision, applies to the 100 top schools in America, as well as her “safety,” the University of Illinois. Rob has a gimmick of his own and applies first as Rob Taylor and then legally changes his name to “Running Elk Taylor,” indicates his Native American heritage on his application, and applies to the same schools again. Carrie’s a legacy at MIT and her mother won’t hear of her going anywhere else.

What’s annoying about Sarah and her friends is that they’re all really smart, they’re in the top five percent of their classes at their high-performing school, and their parents are very well off (with the exception of Rob, whose father is described as “blue-collar”)—they’re not going to have any trouble getting into a good school. Sarah’s father even tells her they’ll contribute over $25,000 a year to her (and each of her two siblings). Although Rob estimates that Sarah’s application fees alone will amount to “almost $7500 without postage and supplies” (this reviewer puts that number at closer to $10,000), that is quickly brushed to the side with generous donations from family and friends.

In an age where just about anyone who wants to can go to college somewhere, these youngsters are on the lookout for that magical place that is just right for them. While they don’t particularly want to go to Harvard or Yale, they seem to want the option. Binder dips inside deans’ offices for on-the-nose admission conversations like, “Have you checked the names against the Clout List?” and “Since you’re new here, let me explain something to you.  Illinois is the most corrupt state in the union,” referring, of course to the University of Illinois’ infamous (non-fictional) admissions scandal from several years ago. In “The Girl Who Applied Everywhere,” the central conflict essentially boils down to how does an intelligent young woman from a feeder school with a full support system, wealthy parents and every opportunity available get into a great college?  That’s just fodder for anxious parents.  Anyone who didn’t have the financial or academic success of this group is likely to find the whole thing completely obnoxious. (Kelly Roark)

It’s not clear to me that Ms. Roark read the entire book (although I can’t give away the ending here). It is a satire. It’s not to be taken literally–just like Jonathan Swift was not seriously proposing that the Irish eat their babies in his famous essay A Modest Proposal. The idea is to force people to think about the entire process by making the subject look ridiculous.

Rick Kogan, who did finish the book, called it a “fabulous satirical novel” on his WGN (Chicago) radio program.