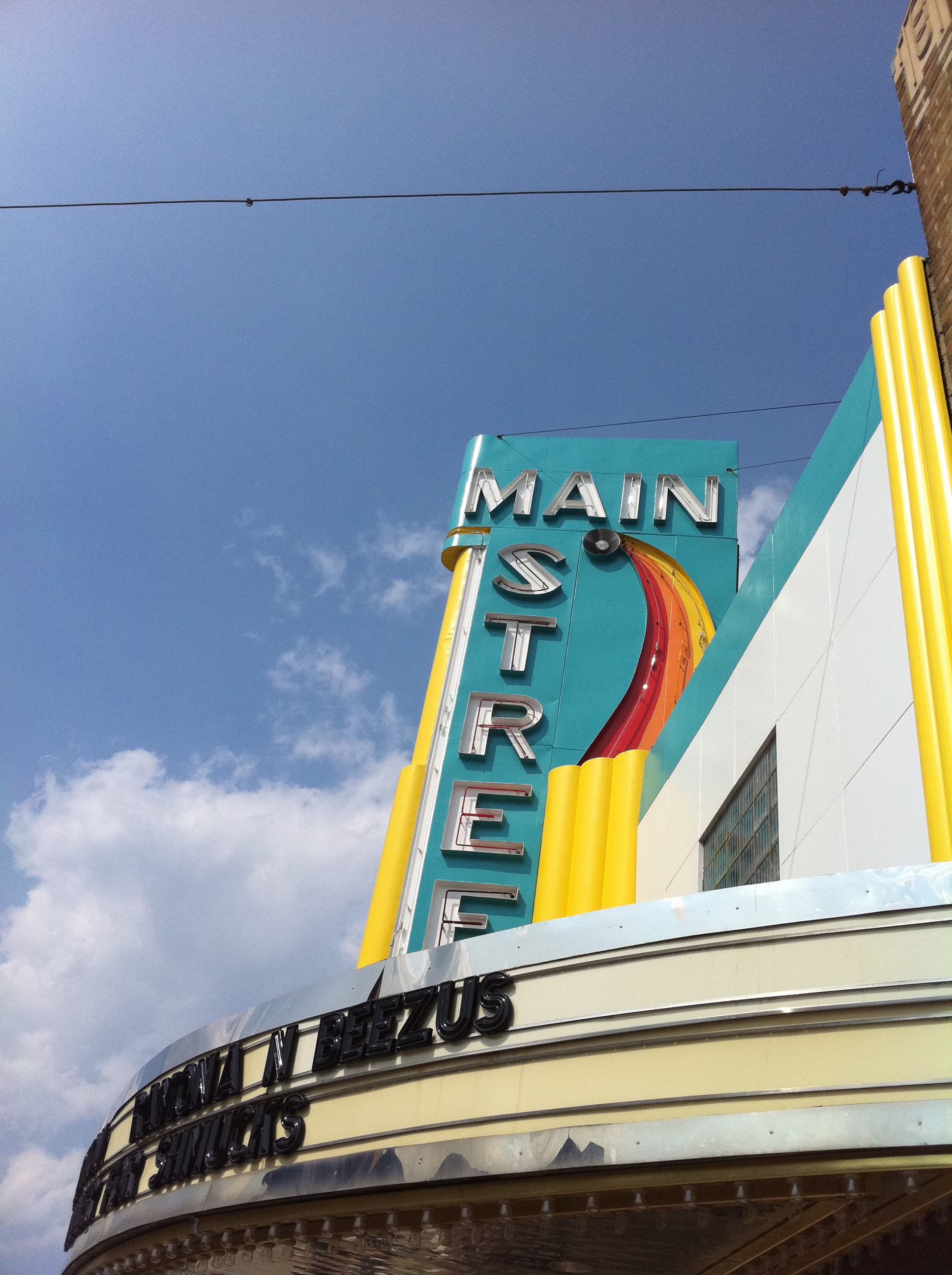 America’s first Nobel Prize winner in literature, one of a esteemed oligopoly of letters that includes Faulkner, Hemingway, Steinbeck, O’Neill and Bellow (Pearl S. Buck the odd woman out)—last names only needed—Sinclair Lewis is an American literary giant whose posthumous posture becomes more and more diminutive with time. When I mentioned plans to visit Lewis’ hometown of Sauk Centre, Minnesota to a couple acquaintances, acquaintances who review books mind you, I got responses like, “I tried to read ‘The Jungle’ and never really got into it.” Though some Chicago bias toward the unrelated Upton Sinclair is understandable, this kind of confusion rarely plagues the likes of Lewis’ contemporaries, including most of those named above, as well as Fitzgerald and Dreiser. (Ironically, the young Sinclair Lewis did take a break from undergraduate studies at Yale to work at Upton Sinclair’s cooperative-living  Helicon Home Colony in Englewood, New Jersey.)

For more than thirty years, I’ve passed a sign on the interstate en route to my family’s lake cabin in western Minnesota that reads “Sinclair Lewis Interpretive Center” and, for a minute as we whisked by each year, felt an itch of interest that  finally needed a scratch last summer.

Just a stone’s throw off the highway, the Center occupies land that has been coveted in more recent years for higher purposes; its proximity to travelers seems more desirable as a McDonald’s perhaps, or even a Motel 6. Though its would-be demolishers cite a desire to move it, not to make it extinct, it does seem to resonate with a melancholic note of poetic justice in the hometown of the writer who overturned the myth of small-town virtue and harmony, and in doing so, shone a light on a dark section of the American dream. For the residents of real-life Gopher Prairie (the fictional setting of Lewis’ blockbuster breakthrough, “Main Street”), mortality and America’s diminishing interest in literature lent them the ultimate hand. 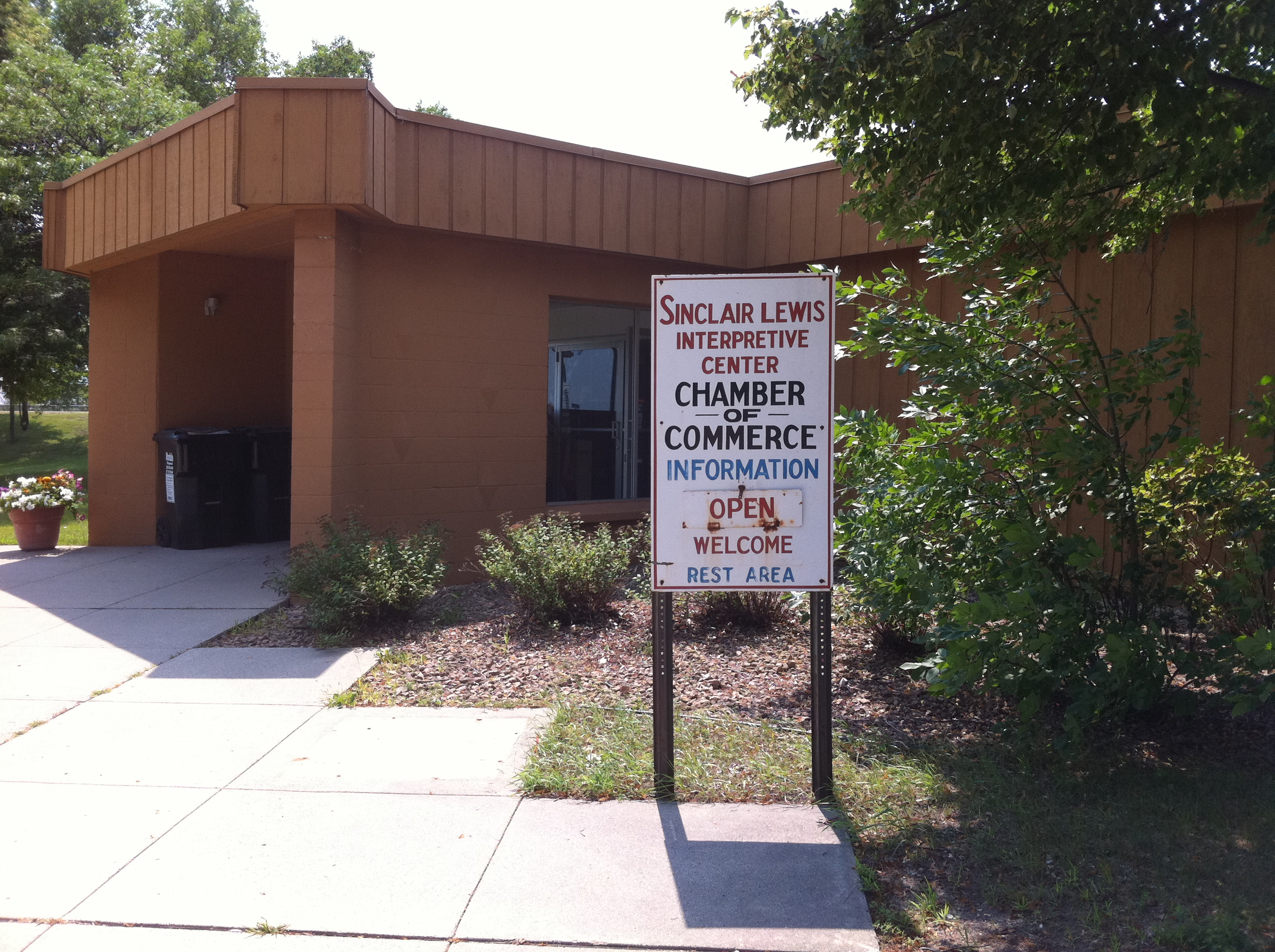 The Center is a thoroughly modest edifice, and its slowly deteriorating condition might eventually do what the developers so far have not. Dedicated in 1975, the Center has likely not yet undergone renovation, not even an updating of its contents, save for a short and informative video that plays on a television so old and small it’s likely that younger viewers might not recognize it as such. The Center itself offers a rather pleasant overview of the author and the town, with some notable highlights, such as the documents in the author’s own hand that illustrate his compositional process, including the creation of characters, the town’s architectural details, and the plot’s genesis in his late work, “Cass Timberlane.” Its modesty also serves the literary tourist well, in tempering expectations for the town visit to follow.

The gift shop—no credit cards, “we’re not that modern,” but they take checks—is constituted of a glass case packed with artifacts as well as early editions of Lewis novels tracked down via the decidedly modern method of eBay. Staffed with a cheerful volunteer who likely might have crossed paths with Lewis when he visited town the last time in 1947, I mentioned that we were all reading “Main Street” in preparation for our visit. “Oh,” she said. “Young people have a hard time getting into that one.” When I thanked her for the compliment, about my apparent age not my reading skills, she went on to note that she wasn’t especially fond of the work herself. “Too many adjectives,” she said. We paid for our souvenirs, collected a semi-hand-drawn map to Lewis’ grave site, and asked about other sites in town, including his boyhood home (“you have about a half hour; it closes at 3pm”), the stone bridge where his carved initials are still visible (now on private property and no longer a public opportunity) and the Palmer House, built in 1902, a hotel where Lewis once worked. Not only is it open, she said, but “Cindy will even give you a tour upstairs (where Lewis did some of his writing), she’s so welcoming.” We scampered off to get to the house in time for its closing tours.

One generation removed from a farm town in North Dakota, I’ve lived in big cities most of my life, but I’ve spent part of every summer in or around small towns up north not unlike Sauk Centre, so there’s a pervasive familiarity even in my first visit. The wide-open space, the quaint main street that recedes into a ramshackle mix of taverns, grain elevators, gas stations and businesses that seem to have been deserted rather than closed, as if the proprietor still expects to revive it someday and no one seems to have any better use for the land. Where parks serve as civic centers. The residents, who seem to live in slow motion, are both friendly and conscious of the presence of anyone from anywhere but here. Residential streets, with their old-fashioned wooden homes and well-kept lawns are “Leave it to Beaver” in real time. 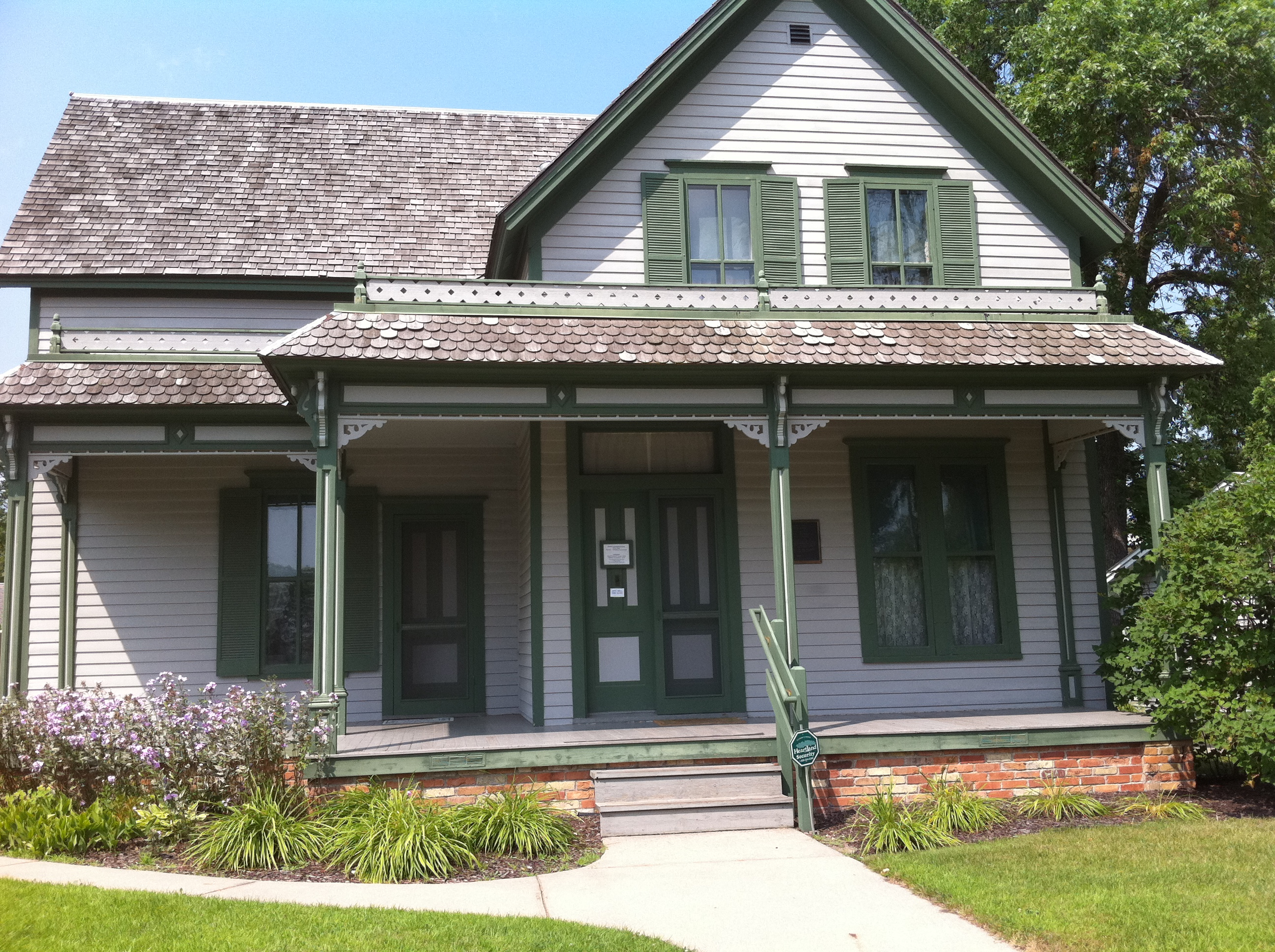 I half expect June Cleaver to come to the door when we ring the bell at 810 Sinclair Lewis Avenue, the boyhood home of Lewis when it was then known as South 3rd Street. Instead, a young co-ed on a summer job answers the door. Though the home is preserved as it was when Lewis lived there, she is not. With her soccer sandals, t-shirt and long baggy basketball shorts, she looks like she’s on sabbatical from a LeBron James pool party, rather than caretaking a shrine to an American literary giant. She points, with long brightly painted nails, to Lewis’ birthplace across the street and then starts showing us around. The parlor, the dining room, Sinclair’s authoritarian father’s doctor’s office, and so on. It’s a well-kept glimpse at upper-middle-class small-town life a hundred years ago. Upstairs, too. Most memorable is the tiny bed Sinclair, the baby of the family, slept in. Our guide grew up in town but hasn’t read her bread and butter’s work. They did have a week dedicated to his study in high school, but it fell on senior week and, well, other priorities tend to interfere, you know. She’s tried to get into “Main Street” this summer, but already bailed. (In her defense, the twentysomething members of our entourage were equally vexed with the work and didn’t finish.) She likes the biographies of the author sold at the house better. It’s too bad she’s not tackling the novels, though, since there seems to be a fair bit of downtime for her as one of two tour guides at the home. We’re closing out one of the busiest days of the summer; she’s done four tours today.

Sauk Centre is a town of 4,316, approximately a hundred miles northwest of Minneapolis. Unlike most small towns across the country, it’s growing, albeit slowly; its population was 4,051 in 2004. I know this because the Sauk Centre Herald, an old-fashioned broadsheet (“Community Coverage 143 Years”), carried a full accounting. The newspaper itself is a thing of wonder, from its front-page stories about lemonade stands and retired local football legends who tend flower gardens, to its police blotter written in its own language: “July 25: Suspicious vehicle; citizen contact; speed (7); welfare check; juvenile problem; cracked windshield; window tint; exhaust.” 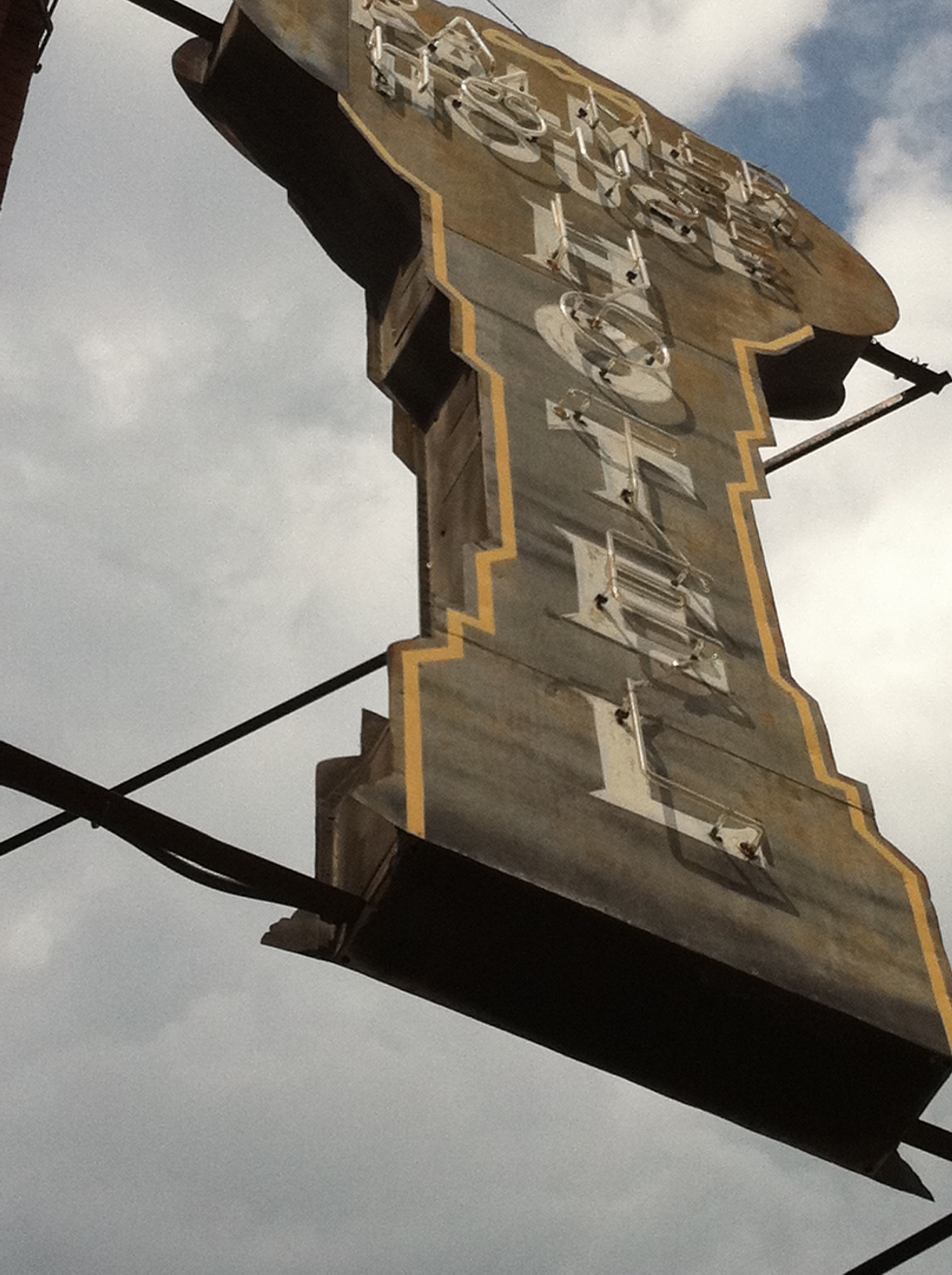 Unsurprisingly, there is a Main Street in Sauk Centre; its principal cross street is now named for its most famous progeny. There’s a grand marquee for the Main Street movie theater here, a tavern there. Walk a block or two and the morsel of urbanity quickly gives way to its rural soul. But at the intersection of Sinclair Lewis Avenue and Main Street, the Palmer House, built 1901, still stands in its turn-of-another-century glory. Lewis worked at the hotel in his youth—he calls it the Minniemashie House in “Main Street”—but its claim to fame today seems much more focused on its apparently haunted status. A Nobel laureate can’t hold a candle to a Biography Channel feature, it seems. And in spite of suggestions that our interest might be rewarded with a tour of Lewis’ former haunts upstairs, the not-so-cheerful woman at the desk responded to our questions with a ghostly chill.

Though not his first novel,”Main Street,” published in 1920, was Lewis’ breakout hit, “the most sensational event in twentieth-century American publishing history,” according to his biographer Mark Schorer, making its author a millionaire. Its story skewered the romantic notions of small-town life that prevailed at the time (and still today, it seems), and created a strong female protagonist reflective of the “First Wave” of feminism that had resulted in the brand-new Nineteenth Amendment to the Constitution, granting women’s suffrage. Lewis quickly turned out his most influential work in a flurry of productivity, with “Babbitt” (1922), “Arrowsmith” (1925), “Elmer Gantry” (1927) and “Dodsworth” (1929) rounding out one of the great decades of his or any writer’s lives.

Though Lewis left Sauk Centre early for Yale and never lived there again, he never left for long either, returning for regular visits. And it’s not surprising, either, for all of the hypocrites and back-stabbers who populate “Main Street,” there is something in the book that guides the reader home to Gopher Prairie rather than pushing us away. The rich and famous author, whose novels became Academy Award magnets on the silver screen, died in Rome, Italy in 1951 at the age of 65. But his ashes were returned, at his request, to Sauk Centre to be buried.

The cemetery’s as understated as its town, and as lightly attended as the boyhood home. In fact, as we track down Sinclair’s modest grave stone between his parents, I suspect any observers expect we’re family on an obligatory visit. The town’s most famous citizen is marked by a small stone labeled simply “Sinclair Lewis, 1885-1951, author of ‘Main Street’.”