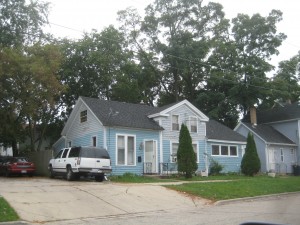 Chicago’s sci fi pedigree is impeccable. Edgar Rice Burroughs (creator of Tarzan and John Carter: Warlord of Mars) was born in the city and lived in Oak Park, for example, while Weird Tales magazine—publishers of H.P. Lovecraft, Robert E. Howard, Robert Bloch and others—had offices downtown. The real coup, however, is Waukegan, the setting for the birth, boyhood, and books of Ray Bradbury. A short trip to the town revealed that the writer of “Fahrenheit 451” is a prophet with honor, but minimal commemoration, in his hometown.

A Midwestern Proust, Bradbury re-imagined Waukegan as Green Town, Illinois, in several works—most famously in “Something Wicked This Way Comes” and “Dandelion Wine.” Per Bradbury, Waukegan was a charming rural burg of the twenties, rife with sun-dappled fields and pies cooling on windowsills, which happened to be visited by serial killers and evil carny demons. Waukegan may well have been sun-dappled, etc. when Mr. Bradbury was growing up, but today’s reality is grim. The Autumn People may have succeeded, leaving semi-industrial, depressed Waukegan—location of three superfund clean-up sites—in their wake. It’s not a happy place, though it’s obvious some people are trying to revive the poor thing. 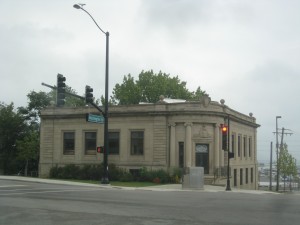 For the devoted Bradburyian, the raybradburyboard.com site points out sites where Bradbury was sired and inspired. Bradbury’s boyhood home (at 11 South St. James) is a little underwhelming; a charming though squat house that probably looms larger in his memory than in reality. His grandparents’ house (due north at 619 Washington) is a more impressive and literary-looking place. Currently, both are private residences, so mind your manners.

To find “Fahrenheit 451″‘s roots, head over to 1 North Sheridan Road, where the former town library sits. Completed March 20, 1903, after the locals received $25,000 from library-happy mogul Andrew Carnegie, the self-taught Bradbury spent much of his youth here. The library closed in the sixties and moved to more spacious quarters, but the building can still be appreciated for its sugary turn-of-the-century architecture. 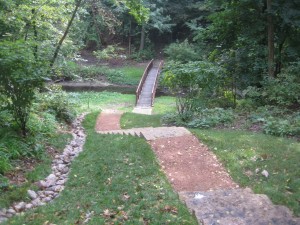 The ravine in Ray Bradbury Park

Looking for some green amidst the grey? Make your way to Ray Bradbury Park at 99 North Park Avenue. It’s a pleasant place, if you ignore the colorful, Cronenbergian playground equipment—especially the tongue-like slide. A tasteful and poetic commemorative brass plaque commemorates Bradbury, while another one explains his career with glaring children’s-museum graphics. Behind the park is the ravine, which has a starring role in “Dandelion Wine.” It’s a beautiful, evocative, slightly disturbing place—a perfect site for a slaying by Bradbury’s fictional killer the Lonely One. While I visited, heebie jeebies were added by the obviously troubled fellow who silently walked past me and down the ravine steps, moved several yards downstream, and laid face down on a fallen tree crossing the water. Do I feel a chill?

Bradbury remains alive, living in California and continuing to rail against book-banning and the like. When he passes, let’s hope Waukegan pulls out the stops. Comedian Jack Benny is the town’s other favorite son, and has a statue in the town square. Ray does not. Moreover, here’s hoping the Chamber of Commerce snatches up his old house for a future museum. I’d pay to see original manuscripts, props from the “The Martian Chronicles” television series (not a great show, but the Martians looked awesome), and Ray’s baby booties.