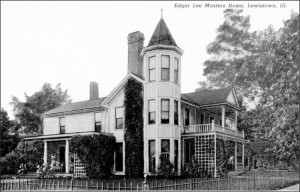 Lewistown, Illinois. A sleepy town nestled in the rolling hills of Central Illinois so typical that during World War II they built a German POW camp, Camp Ellis, just to the east. After all, if the prisoners escaped, where would they go?

But in Lewistown’s Oak Hill Cemetery there are gravestones with names and, most of all, stories. Tales of adultery, lust, homosexuality, boredom, malice, avarice and greed. Tales that took the myth of the moral, upright, All-American small town and portrayed it as a cesspool of hypocrisy, faded hopes and corrupted dreams. These stories were told in the form of 244 poems which were published in the “Spoon River Anthology” by Edgar Lee Masters.

Masters, who was also Clarence Darrow’s law partner from 1903-1908, is now a mere footnote in early twentieth-century American literature. But when the “Spoon River Anthology” was published in 1914, it was the leading publication from a group of writers known as the Chicago Renaissance, whose members also included the likes of Carl Sandburg, Vachel Lindsay and Theodore Dreiser. Together they managed to move the focus of American literature from New York and New England into middle America, helping pave the way for such Midwestern natives as Ernest Hemingway and F. Scott Fitzgerald. The anthology was also a major influence on author Sherwood Anderson. Some even say that his groundbreaking 1919 short story, “Winesburg, Ohio,” was a “prose version of the ‘Spoon River Anthology’.” 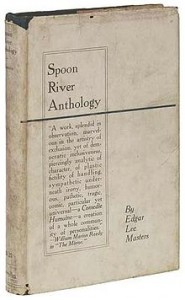 As for poets, Masters has been compared to Walt Whitman and was cited by Ezra Pound as a major influence. “It is safe to say,” declared Ernest Earnest in Western Humanities Review,”that no other volume of poetry except ‘The Waste Land’ (1922) made such an impact during the first quarter of this [the twentieth] century.” Much of Masters’ life secrets, history and lore can be found in the home of his teenaged years and young adulthood: Lewistown, Illinois.

A drive to Lewistown begins with an uneventful parade of cornfields and rest stops. Driving east from Peoria you pass the town of Kingston Mines along Route 24. If that sounds familiar, yes, the blues club was named after the town. Legend has it that an old Chicago actor, Jack Wallace, who was part of an ensemble there (Kingston Mines originally did theater—remember “Grease”?) had relatives in the area which inspired the name. As you begin to head southwest, something almost magical begins to happen. Roads begin to meander and curve. And as you approach the Spoon River Valley, those flatlands suddenly turn into gently rolling hills covered with greenery that, at a distance, looks like somebody tossed a giant piece of felt over it.

Lewistown is just off of I-78. It looks like most Midwestern small towns with a Dairy Queen, Subway and the always-hopping Rocket Tap. If you walk just south of Dollar General Store (the last big store for many, many miles) you find the Oak Hill Cemetery, where the ghosts of the “Spoon River Anthology” lie. Unlike England and Ireland, many American towns and even big cities pay little or no homage to writers and artists. Many consider Ernest Hemingway to be America’s most famous and popular literary figure, yet private organizations are constantly begging for funds to refurbish his birthplace and childhood home in Oak Park. But just off of the entrance to the cemetery is a tidy garden/square that commemorates the life and literature of Masters. Fashioned from newly minted red brick, it is comprised of a bench, flowers and a large red-granite monument to Masters molded in the shape of a book with white stone in the middle to signify the pages. At the top, an almost-photographic likeness of Masters has been etched into the granite above his name.

You can enter the cemetery through a semi-circle steel arch, common for many Protestant cemeteries in the Midwest. The tombstones inside are often dated and worn, and like most old cemeteries would make a great location for a nighttime ghost story. Masters prefaced the anthology by referring to the cemetery as “The Hill.” In fact, the first lines of the anthology refer directly to the cemetery:

“Where are Elmer, Herman, Bert, Tom and Charley,
The weak of will, the strong of arm, the clown, the boozer, the fighter?
All, all are sleeping on the hill.”

One of the gravestones, a tall arching monument, belongs to Nathan Beadles. Beadles was apparently the inspiration for the poem “Nicholas Bindle,” who complained at his death of Deacon Rhodes, a corrupt preacher who sent him to ruin. Others of whom Masters wrote about on “The Hill” include Georgine Sand Miner. A runaway and mistress to several men, she exposes the wife of her longtime lover as a lesbian after he refuses to divorce her. Despondent after a life of broken promises, she professes she would rather be shot dead than live in a small town with the reputation of a “harlot.”

Forty miles east along County Highway 6 to Petersburg, you will find the Edgar Lee Masters childhood home, which has been transformed into a museum. A small country house with knurled wooden columns overhanging a traditional country porch, it is a treasure trove of Masters’ life and works. Besides photos and furniture including Masters’ writing desk and grandfather clock, it houses his entire collection of first editions which includes forty-two books and hundreds of poems. The society has also assembled fifty years worth of letters and correspondence including many between Masters and his eldest son and his former law partner Darrow. Located on the corner of Eighth and Jackson Streets in Petersburg, it is open from 10am to noon and 1pm to 3pm Tuesday and Thursday through Saturday, Memorial Day through Labor Day. 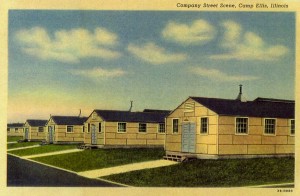 A thirty minute drive from Lewistown are the remains of a former German POW enclave, Camp Ellis. Located a short distance from the Spoon River itself, the prison camp looks more like a Roman ruin dropped in the middle of acres of cornfields. Time and weather have melted away all of the wood, steel and other semi-perishable materials, leaving  a series of cement and stone foundations and crumbling walls. Spread out over a quarter of a mile, the setting is desolate, quiet and eerie. Most of us have seen tanks, planes, guns and uniforms from World War II in museums and town squares, but few have had the opportunity to see, touch and feel structures that actually belonged to the enemy on American soil. Sit among the ruins of the barracks on a hot summer’s day, close your eyes, and you can almost see the ghosts of the German soldiers in their grey uniforms, working in the now-empty cornfields. Open your ears and you can hear the guards shouting at the prisoners in their native tongue—”Achtung!”

During the first weekend of June, Lewistown celebrates Masters’ life and work with a two day celebration. But walk through the Oak Hill Cemetery at dusk on any night and you can feel the life, spirit and scandalous secrets of what goes on in Lewistown, and many small, seemingly innocent small towns throughout the Midwest. Masters may have summed up these secret desires and lusts of small town residents, in his poem from the “Anthology” titled “A.D. Blood.”

Why do you let the milliner’s daughter Dora,
And the worthless son of Benjamin Pantier
Nightly make my grave their unholy pillow?