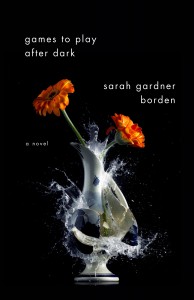 Kate Allison is a recent college graduate when she meets her husband-to-be Colin. Kate and her roommate Darcy, young women with a shared penchant for trendy Manhattan bars, designer clothing and boutique grocers, have planned a dinner party: an ambitious attempt at playing “grown up.” On the menu is Creamy Polenta with Mascarpone, Red Oak Salad with Gruyere, Mashed Turnips with Frizzled Leeks, Stuffed Chicken Breast and Herbed Goat Cheese. The dinner is doomed to fail and, indeed, does.

Then Colin enters the kitchen. He clears the clogged kitchen sink drain, then helps Kate in putting Darcy into bed, cleaning up the kitchen, and sending home the rowdy guests, who’d only wanted to get drunk anyway. Kate shows him her room and then her bed. We don’t know it yet, but their first meeting is a telling metaphor of their marriage to come. Their relationship forms, fueled by sex, intimate conversation and Kate’s intuition that she could have him, all of him, if she wanted. She felt “split open and figured out; everything about him was like a warm and curious hand inside her, making sense of the rubble and confusion, turning things over and putting them back where they belonged.”

We follow their lives as if flipping through the pages of a family scrapbook: they purchase a used Jeep, rent an apartment closer to Colin’s job. They take a European honeymoon. Their spats and arguments are never too big or complicated to not be solved in the bedroom. They buy a house in the suburbs and Kate gives birth to two beautiful little girls.

Just as the novel seems to beach itself in recounting the suburban domestic dream life, Borden begins telling the story of Kate’s childhood in intermittent flashbacks: her father, disappointed that Kate, his first born, is not a boy, but loving her fiercely nonetheless; Kate’s bedroom escapades with a neighbor boy, and her father’s subsequent disgust at her burgeoning sexuality; their eventual falling out, and later, his amusement at Kate’s early marriage. As Kate and Colin’s marriage progresses, it becomes clear that what was once quelled by sex was never solved, and that there are dark and poisonous things lurking beneath the surface.

Borden intuitively manages the narrative, taking her time to build the years of Kate and Colin’s marriage, layering their arguments and revelations like a dessert (but one heavy on the arguments). Kate’s resentment of her domestic duties (the messes, the tantrums, the punishments gone wrong) is not a new storyline, but Borden avoids cliché by making Kate’s struggles seem suffocating and close, and tragically inescapable. An impressive debut, “Games to Play After Dark” is an important read for women perplexed or interested in the inevitable collision of self, sexuality and society’s expectations for family and motherhood. (Naomi Huffman)