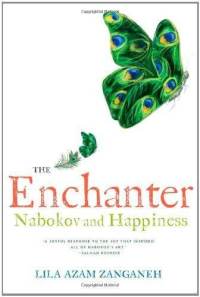 What promises to be an interesting merger of critical theory, popular biography and memoir turns out to be little more than an expression of un-self-conscious, occasionally creepy fandom in Lila Azam Zanganeh’s “The Enchanter: Nabokov and Happiness”—a debut that feels three times as long as its 189 pages.

Nabokov—one of the most towering figures of twentieth-century literature—wrote profoundly complex, wildly smart novels. They were packed with human characters, treated by their creator humanely. In classics like “Lolita” and “Pale Fire,” he wove deeply felt stories into the complicated lattice of his structures and systems. And did so with an obsessive attention to detail, the kind that can only be achieved through a deep love of one’s craft.

It’s that love—of writing, of life—that Zanganeh sets out to document in her book. Unfortunately, she spends more time saying things like this: “Some days earlier, I had, in fact, had a dream. He was there. So close I could almost touch him.” Or this: “As I again sit at my desk, I realize that, for a while now, I’ve been ignoring a slight swerving. Like the onset of something; a mild vertigo, not altogether unpleasant.” Or, most cringe-inducing, this: “You’re about to begin the twelfth chapter of ‘The Enchanter: Nabokov and Happiness.’ Contentedly, you stack two pillows behind your head, curl up in your quilt and switch off the TV.” 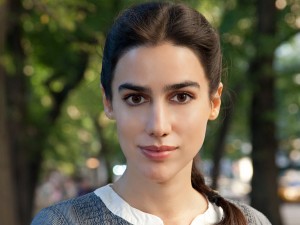 Consider our first introduction to Dmitri Nabokov, the writer’s son and executor of his literary estate. He and Zanganeh go together to Lake Geneva, where Vladimir and Vera Nabokov’s ashes have been scattered. Dmitri is given zero lines of dialogue in this chapter. Instead, Zanganeh tells him about a dream she had of his father the other night, and jubilantly reports back to us that “Dmitri is moved, even pleased” by the idea. Then he vanishes for thirty-nine pages, reappearing to sit by Zanganeh’s side as she looks at a sunset.

Why she makes such poor use of her sole living source is unclear, especially considering how thin her research seems to have been otherwise. Other than her uninteresting scenes with Dmitri, her research consists solely of reading lots of Nabokov—something one assumes she’d have done whether she was writing a book or not. In the sources section, she admits: “Nearly all the facts of Nabokov’s life are taken from Brian Boyd’s remarkable two-volume biography: ‘Vladimir Nabokov: The Russian Years’; ‘Vladimir Nabokov: The American Years’.” Reading this acknowledgment, it is hard not to wonder if all the tangents and authorial intrusions function to distract from lazy scholarship.

If it seems like I’m being overly harsh, it’s because Zanganeh seems capable of much more. Apparently a regular fixture of the New York literary scene despite this being her first book, she has taught seminars at Harvard. She reportedly speaks six—six!—languages. And, like the subject of her book, she is something of an international scholar—Paris-born, of Iranian descent and eventually an American academic (Nabokov had been forced to flee Russia in the late 1910s, moved about Europe before eventually settling in the US).

And, in paying homage to her hero’s style, she proves she can turn a phrase. Meanings “speak in a whisper, a draft of phrases, like an arcane language almost out of earshot.” In summing up Nabokov’s philosophy of time: “Time folds. Only the present remains.” And though her language sometimes veers into the excessively flowery, her sentences are often, like Nabokov’s, a pleasure to read.

The shame here is that, unlike Nabokov, Zanganeh’s talents seem to mostly be in service of odd scenes like this most curious final chapter: a dream sequence in which Zanganeh finds Mr. Nabokov writing, as he did, on notecards.

“Ah, here you are,” her incarnation of the writer says. “I have been waiting for you.”

He regards her with bemusement. She regards him with wonder—speechless, her mouth agape.

“Well, child, now that you’re here you might as well sit down,” Nabokov tells her. “You’re quite small. What do you need?”

Why Zanganeh feels compelled to divulge this to us, or even why she thinks we’d be interested in such a thing, is mysterious.

More mysterious still are the blurbs on the book’s jacket that sing its praises. Salman Rushdie calls it a “joyful response to the joy that inspired all of Nabokov’s art.” Orhan Pamuk deems it: “Very delightful.” Even Dmitri Nabokov, who exists here, as every person in this book does, merely as a foil for Zanganeh herself, raves about it. If we read the same book, I’m not sure what those people saw in it that I just couldn’t. All I saw was a love letter to someone else—something my eyes were never meant to see. (Eric Lutz)