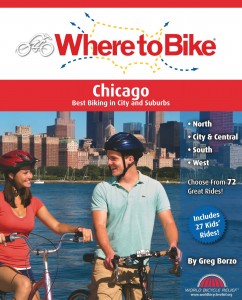 Chicago is easily one of the most bike-friendly cities in the United States, and those of us who bike recreationally or to commute are familiar with the excellent free maps from the City of Chicago, which have  the best streets for travel highlighted and take the guesswork out of how to get around town. For ten to twenty bucks more, you can buy a detailed bike map of the surrounding burbs. So is it worth it to spend more money on a book that offers more or less the same information?

It depends on what kind of biker you are; and frankly, only the most novice of bikers, who are also the most averse to exploration and risk-taking, are going to get much out of Greg Borzo’s new guide to Chicago biking. The book is laid out with pre-planned rides broken down by area (city, South, North and Western suburbs), with forty-five rides and twenty-seven “kids’ rides.” Each route contains a basic map and a detailed list of what you’ll see, along with traffic information and tips about where to stop for food. The routes range from short kids’ rides to trips about thirty miles long, all set on loops that begin and end at the same place.

The problem is that these routes are so pre-planned that it’s nearly impossible to use the book if you’re going to do any slight variations on the suggestions. For example, it’s impossible for me to know how long a certain section of the Fox River Trail is, because the author only laid out mile markers for the specific loop he chose. For those of us who want to explore longer distance, this book is basically worthless; it’s relatively heavy and cumbersome at 280 pages, and it gives no sense of how trails run together or how to get to many of these routes by bike (the author assumes we have a car and often recommends driving rather than taking mass transit to trails). For example, this weekend I biked twenty-five miles through the Western suburbs, randomly weaving along trails and recommended streets for biking, from Batavia to Hinsdale, using a cheap suburban bike map and exploring towns along the way; there’s no way I could have done this with Borzo’s book. Almost everyone would benefit from sticking to their trusty maps and researching routes online in advance.

That said, “Where to Bike” is a good inspiration for trips. The photographs and illustrations are at least as strong as the information, and there are enough snapshots of trails and destinations to get you excited about taking a trip to a new place, even if you feel like you’ve seen it all. Just leave the book at home when you go. (Monica Westin)

I disagree. I found that I didn’t know about any but the most obvious bike trails — those near the lakefront and the major suburban trails. There are so many more, and this book covers them. I am not a novice, and this book encouraged me to expand my horizons beyond the familiar.