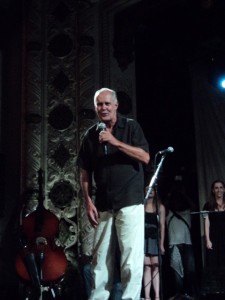 If slam poetry is still the religion it once was, then the Green Mill Cocktail Lounge is its cathedral. Of course, like the best of lounges, the Green Mill is the opposite of a church. Rather than natural light and sanctity, it conjures sea grottos, manmade dimness, embellished curves.

On a recent Saturday in Wrigleyville, the rock club Metro served as a surrogate to slam poetry founder Marc Smith’s traditional pulpit. It served quite well. If a little less cavernous, the Metro was no less ornate and grotesquely organic than the Green Mill. Should the low-key ambiance have suggested slam has lost its edge, though, the pantheon assembled for the twenty-fifth anniversary of slam poetry immediately extinguished such doubts.

As flickers of home-movie-styled footage of poetry slams past ran against the back wall of the Metro stage, you could almost trace its origin story. In the varying clarity of footage dating back to the mid-1980s, it was possible to imagine Marc Smith’s audacious beginnings as a reviver of performance poetry. An extremely literate socialist who grew up on Chicago’s Southeast Side, Smith adapted the performance aspect of beat poets like Allen Ginsberg to a more approachable dimension. By creating the format of the slam competition at the Get Me High Lounge in 1984, Smith destroyed the aesthetic boundaries of beat performance, adopting instead an anything goes attitude in terms of engaging the audience. 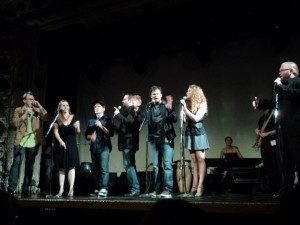 While not a fully realized break from the past, then, what Smith engineered was arguably disparate from earlier performance poetry, if not in tone, then certainly in philosophy. Slam poetry has perpetually been a populist art form. Whether this persists because of Smith’s workingman origin story in construction, or the necessarily ephemeral nature of each performance, which encourages crowd interaction and moment-by-moment modifications, is unclear.

But the fact remains that slam resists canonicity. Like the culture Rob Horning describes in his essay “The Death of the Hipster,” slam has been vigilantly, almost self-consciously, defiant of its own trends. The moment a tone or style has been recognized, it becomes fodder for mockery. This is reflected in Smith’s opening spiel each Sunday at the Green Mill (where the proceedings moved in July, 1986 and have remained since), in which he encourages the audience to yell out predictions of over-obvious rhymes or hiss at sexist rants. Slam thereby resists stratification, and that resistance was nowhere more on display than at its twenty-fifth anniversary, an occasion that, for lesser forms, would have occasioned mawkish reflection.

“This is a room where Dionysus would be welcome,” theater critic Mary Shen Barnidge said, invoking the wild Greek god often associated with music. It was an intentional move not conjuring Apollo, the god of poetry and order, and it reflected the populist irreverence towards structure and tradition at the heart of the night.

Even as the crowd basked in the nostalgia of the opening video montage by cheering at the appearances of various performers, for example, a group of slam poets had clustered on the darkened stage to undercut them.

“It looks like a bunch of memories,” one of the poets, a member of the Chicago Speak’Easy Ensemble, said, looking up at the blurry montage. “A Ken Burns documentary, maybe,” another added. “There are no teenagers in it, so I’m not interested,” a final poet said.

As much as this mockery was posturing for laughs, the theme of the present slam generation devouring its antecedents persisted through the night. At one point a member of the Speak’Easy Ensemble pointed offstage and said “The graveyard’s that way” to Smith, now in his early sixties.

The populist banner continued being waved as the night progressed, with lines like “We have quarantined our poets,” and “There’s a story only you can tell” acting as makeshift mottos for slam poetry as a whole. 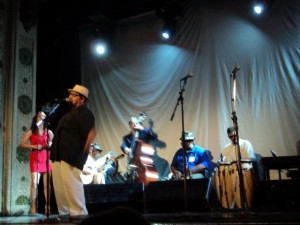 Yet the vitality of the form shone through the platitudes, with hallowed members of the slam community like David Hernandez, who performed with Street Sounds, a jazz and Afro-Latin inspired band.

“I started doing poetry music to take it out of the wine-and-cheese crowd,” Hernandez said between poems, adding, “So we took it out to the street and we started drinking wine.”

After crumpling up his first poem and tossing it into the audience, Hernandez continued by saluting Smith, saying “Marc put us all on the map.”

As slam’s de facto preacher, there was naturally some proselytizing on the part of Smith, who urged the audience to recognize the benefits of removing poetry from its academically stifled context. He focused on taking apart the claims that slam was less legitimate than other art forms. “If you’re ever in that conversation,” Smith said after an emphatic performance by Patricia Smith. “I want you to stand up and say they’re wrong.”

If Smith ever faltered the night, it was during its most structured aspect, the poetry slam itself. A competition between two teams involving audience judges and scorecards, the slam has been acknowledged by Smith on his website as a potential gimmick. During the anniversary, it was a rigid form in a night mostly devoid of them. Yet the emotionally intense performances for the competition, including standouts by Patricia Smith and Regie O. Gibson, allowed the triviality of the slam to fade into the background.

Finally, amidst the poignancy of the night, Smith delivered a stunning conclusion through his performance of “Pull the Next One Up,” one of his own compositions. “It’s kind of sentimental, but I think it works,” Smith said before launching into the exhortative poem, his voice rising into shouts and trembles as it went along.

As those dim purplish lights of the Metro rose, the crowd slowly came to their feet and began applauding. “Don’t waste time scratching inscriptions into the monolith!” Smith had exhorted at the height of the poem.

And yet, that’s exactly what he’s done.