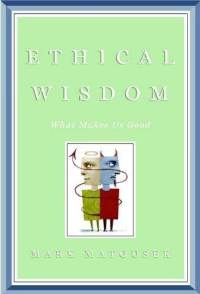 The past fifteen years has seen the emergence of a new subgenre in science writing. It all started with Daniel Goleman’s “Emotional Intelligence: Why It Can Matter More Than IQ, ” published in 1996. In that book, Goleman, a trained psychologist, argued that the development of “emotional and social intelligence,” as opposed to logical reasoning, was the key to a life well-lived. Goleman’s book spent more than a year on the New York Times bestseller list, and has even influenced policy makers in the fields of education and human development. In the intervening years, other writers such as journalist David Brooks in “The Social Animal,” have written books elaborating upon Goleman’s basic thesis.

Goleman makes a cameo appearance in Mark Matousek’s new book, “Ethical Wisdom: What Makes Us Good,” which offers a relatively casual introduction to this line of thought—although Matousek is interested in connecting emotional and social intelligence thinking to morality, and not, as with Brooks and Goleman, to happiness. Subjects are broken up into bite-sized chapters; to ease digestion, humor is sprinkled liberally throughout the narrative. But Matousek’s lack of interest in detail or subtlety makes “Ethical Wisdom” a particularly egregious example of the problems that, to varying degrees, plague all of the emotional/social intelligence books.

Most people know that emotions are very important to moral thinking and action. One thing that Matousek says he wants to do in “Ethical Wisdom” is to show how recent research in neuroscience, evolutionary biology and psychology fleshes out this intuitive point. But Matousek also claims that this research proves a more controversial view: that moral thought and behavior are largely a matter of unconscious, or at least involuntary, processes, and therefore, conscious deliberation and reasoning play a much smaller role than we’d like to believe.  However, for Matousek, this isn’t a bad thing. In his view, everything we’ve learned about these unconscious drives suggests that man is inherently “good”: social, empathic, loving, altruistic. In other words, Freud got it only half right: we are the playthings of the subconscious mind, but the subconscious mind really just wants us all to get along.

Matousek points, in particular, to the discovery of the mirror neuron. According to Matousek, mirror neurons essentially allow people to experience what others experience: when I see someone raising a cup to his lips, my mirror neurons allow me to imagine what that person is experiencing. So, the argument goes, when I see a man kicking another man, I feel the pain of the victim, and this basic empathic reaction primes my sense of justice, motivating me to  intervene on the victim’s behalf.

Although Matousek comes back again and again to mirror neurons, he devotes only a couple of pages to explaining how they work; the admittedly vague account I offered above is the most I could glean. But even assuming that something like that is right, it seems that mirror neurons only support the point that humans are inherently social, not that they are inherently “moral.”  Why, after all, should I not empathize with the one who is gleefully kicking away rather than the one on his knees—especially if it’s 1994, the guy doing the kicking is a Hutu like me, and the guy on the ground is a disgusting, vile and utterly worthless Tutsi?  If mirror neurons allow me to pick up all of my parents’ feelings, won’t they help me pick up their racism, their selfishness, etc.?

Matousek isn’t totally oblivious to the difference between being social and being moral. He grants that group loyalty is a serious problem, and that it is partially the product of our society-loving brain. “The trouble is that our moral organ, so intimately wired to the limbic system, errs on the side of negativity, prejudice, stereotyping, and phobic responses geared to the Ice Age,” he writes. But he thinks that these tendencies can be checked, and that there are true standards of right that transcend custom or “group consensus.” What faculty is capable of apprehending these true standards and correcting for bias? You guessed it: good old-fashioned reason. “Helped by the higher angels of our neocortex, we learn to unpack our own prejudicial suitcases, sort truth from consensus reality, and make considered personal choices.” It seems that what really gives us morality in its most humane and well-articulated form is reasoning, considered thought.

Matousek tells us that we are resistant to the idea that unconscious and involuntary processes form the basis for moral thought and action. He writes as if this resistance is the product of some kind of medieval, pre-scientific superstition about our absolute freedom of will. Nothing could be further from the truth. Rather, the idea that our moral responses are shaped by factors outside of our control runs up against a central notion in our moral lives: the idea that people are accountable for their actions. If I kill you in the grip of an Ambien-induced nightmare, I can’t be held morally responsible because I was, in some sense, not the author of my actions. But if all of my actions are like this—determined by factors beyond my conscious control—does that mean I’m never responsible?

Matousek’s writing is sometimes as sloppy as his thinking. Our brains, according to Matousek, are like “interloping Wi-Fi octopuses”—whatever that means. Describing the conflict between desire and considered judgment, he eloquently writes, “Gut mind contradicts head mind, which contradicts groin mind, which leaves us all in a heap.” He’s not above the tacky shill. A contributing editor to O: The Oprah Magazine, Matousek even gets in a plug for his boss: “Take Oprah Winfrey, who isn’t selfless but is unusually big hearted (and encourages others to be the same way).” Like most emotional/social intelligence writers, he makes overblown claims about very tentative, small-scale experiments, like the Swedish empathy experiment that allowed people to view themselves as they interacted with others using special goggles: “Think what this could do for the Mideast peace process,” Matousek gushes.

What Matousek ultimately offers is a reductive account of morality and its place in human life. For him, all the features of humanity’s moral compass can be traced to the workings of the brain, an organ that has remained relatively unchanged for hundreds of thousands of years. In his zeal to prove his point, he simply ignores the astounding variety of ethical practices people have adopted over the years. Only the influence of accumulated knowledge—in other words, culture—can account for this diversity. Most scientists would not disagree; but Matousek, with the enthusiasm of an evangelist, fails to qualify his claims.

This isn’t a failing that’s limited to Matousek’s book. The social and emotional intelligence writers tend to believe that the answer to many of the problems that philosophers have thought about for millennia—how to live, how to be happy, how to be good—can now be answered with evolutionary models and an fMRI machine. I’m not so sure. Does the fact that a part of our brain lights up when we think about incest tell us anything about why we believe—or should believe—that incest is wrong? Despite all that we know about the evolutionary origins of shame, guilt, pride or jealousy, does biology offer any guidance about how we should conduct our lives here and now?