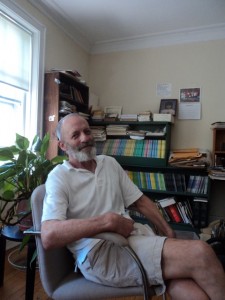 Out in the suburb of River Forest—in an apartment complex housing the last remaining literary journal dedicated to light verse—is a living metaphor. Like the flickering form of light verse itself, the office of Light Quarterly is filled with both relics and curiosities: A cylinder of enchanted “Indian House Blessing.” Shelves of books torn in half by age. A cardboard box crammed with rubber-band-bound notecards on which founder John Mella wrote a novel during his thirty-two years working for the Postal Service.

Even more interesting are hundreds of letters to celebrities, stacked in plastic mail crates. Solicitation letters, to be exact, going out to the likes of the Dalai Lama and Conan O’Brien.

When asked if Light Quarterly has ever received a response, Mella, at sixty-nine years, smiles, his face suddenly illuminated.

“Once,” he says. “Phyllis Diller just said thanks.”

Light verse has been driven far beyond the cultural periphery in recent years, down into the subways as graffiti, and then perhaps farther underground than that. “Today, it is a drab, tiny creature,” R.J. Stove writes.

It wasn’t always this way. In the era surrounding World War II, there was a Golden Age of light verse. Under the guidance of Harold Ross—the first editor of the New Yorker, who according to Stove paid “substantially more for light-verse contributions than for conventionally free-verse”—the form flourished. Life magazine, the New York Herald Tribune, and the Saturday Evening Post all ran pithy light-verse contributions, while poets from E.B. White to T.S. Eliot published frequently in their unique form of wit. Meanwhile, poets like Phyllis McGinley averaged sales of 60,000 copies, according to Stove.

Another generation seemed poised to take up the mantle. John Updike enthusiastically called light verse “a kind of cartooning with words.” X. J. Kennedy joined him as a witty luminary. And then something happened: light verse began disappearing.

What distinguished the fall of light verse is not that a form of written art disappeared (that seems to be a modern inevitability), but how rapidly it plummeted from the public view. While proponents of poetry and prose formed durable shelters against the onslaught of lagging sales and competing art forms, light verse had few serious defenders. It was not, after all, the most serious means of expression.

Now, the last American publication dedicated to the form subsists in River Forest, in an office that doubles as John Mella’s apartment, tended by a few employees. (Including, for a few months this summer, me, as an unpaid intern.)

“You may like it, you may not, but we’re the only game in town,” Mella says, after getting up onto a windowsill and hammering a curtain-rod back into place.

Any definition of what light verse itself is, is, by necessity, arbitrary. It’s humorous, but not always so. It plays on words, or it doesn’t. It usually contains the rhymes and meter so often eschewed by modern poets, but sometimes it opts not to. More often, light verse can be spotted merely by its wit and attitude of irreverence: “I am his Highness’ dog at Kew;” begins an epigram by Pope, once engraved on a dog collar. “Pray tell me sir, whose dog are you?”

Great light verse has this snap to it: A perfect aha moment that comes along with its ending. It has a certain satisfying crunch next to the murky aftertaste of contemporary poems. For Mella, this characteristic has never ceased to have its allure. Over most other modern poems, Mella says light verse has continually possessed for him “a pulse, like the pulse of blood. When that is released by language it penetrates more deeply into the nature of reality.”

His infatuation with light verse began when he was only a few years old, through the books of poetry scattered around his home. He memorized vast swathes of them. Ask him, and he can instantly recite G.K. Chesterton’s playful “I Wish I Were A Jellyfish,” one of the first he ever committed to memory more than half a century ago.

The idea of building a literary journal dedicated to light verse came to Mella while working in the Postal Service. He had been circulating newsletters that challenged writers to come up with neologisms. Whoever invented a new word that was taken into the language—that is, printed four times—would receive the grand prize: a box of Dom Pérignon.

“I wanted to break loose from the Post Office,” Mella says. “Hubris, I suppose, is the word that describes it.”

It was while he printed these that Mella contacted the Missourian bard Robert Wallace, a man Mella describes alternatively as his guru, guide, tutelary and deity. Then editing a publication called Light Year, Wallace wrote back a six-page, single-spaced letter of tips and suggestions on how to run a publication, along with a $600 check, the first of many.

After its founding in 1992, Light Quarterly, along with its supporting organization, the Foundation for Light Verse, attracted a significant amount of talent, including heavyweights like John Updike and X.J. Kennedy.

“In some ways it’s been beyond my wildest dreams,” Mella says. “In other ways, interest is going down.”

At one point, Mella says he was ready to quit the journal because of financial concerns. A donor came through, however, and Mella now says he feels an obligation to the form.

“My thesis is, these verse forms work as well or better than they did when they were introduced,” he says. “It’s like if you have a Ferrari parked out front. Keep it tuned up and well cared for and it will work just as well as it ever did.”

Crouched behind a floor lamp he jury-rigged to bend at a forty-five degree angle over his head, he seems assured, his demeanor simultaneously good-natured and grim.

“This is a disaster,” his sister and office manager Margarita Walters said earlier that morning when a curtain fell.

John, ever the pragmatist, looked down from the windowsill, his hammer in hand.

“If this is a disaster, we’re in good shape,” he said.

In the event Light Quarterly should disappear, Mella doesn’t fear the pulse of light verse going away. Rather, he believes it remains alive in modified forms, transferred into various inlets of culture—hip-hop, satire like The Onion, slam poetry.

And if the Dalai Lama should ever write back?

“I would dance in the streets,” says Mella, raising his hands.