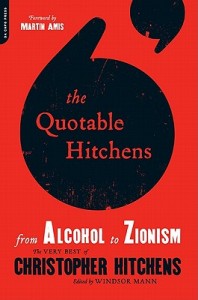 The first clue that something is off in “The Quotable Hitchens: from Alcohol to Zionism” is the fact that the book of quotations, which is arranged alphabetically (more on that soon) does not, in fact, range from alcohol to Zionism, but rather from abortion to Zionism. Hitchens, in all of his ever-contrarian, oppositional and sometimes borderline inconsistent stances, is rabidly pro-life. The fact that the editors found the need to amend this fact for the title speaks volumes about the nature of the quotations found inside.

Let me start by saying that the book does not contain anything milquetoast, watered-down or noncontroversial.  Most books of quotations—and, for that matter, websites dedicated to quotations—are exercises in hackneyed banality, and “The Quotable Hitchens” escapes this. In fact, it’s almost impossible to find a Hitchens quote that can even be edited of its fangs. But the book’s format, which drops hundreds of short quotations into overly-specific headings—for example, “Marx, Karl; Marx, Karl and Sigmund Freud; Marx, Karl and Religion; Marxism”—loses any sense of Hitchens’ nimble, shattering rhetoric.

Instead, what we’re left with is a grab-bag of brief one-liners… good for someone who wants to be able to drop Hitchens lines into conversation to sound more like him, without actually getting at the trains of thought, passionate arguments and unexpected contradictions of the man. There’s a lovely forward by Martin Amis, which recounts some personal anecdotes of  his friend’s withering attacks, but other than that, I didn’t find the book good for much other than playing a game I made up called “guess who Hitchens is describing” (clue: it’s most often Bill Clinton). But for the real stuff, go to Hitchens’ longer pieces, even brief op-eds. They’re far more likely to satiate, engage and enrage you all at once. (Monica Westin)