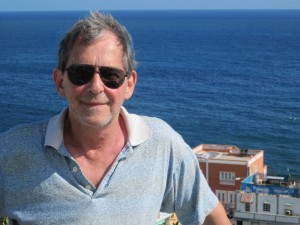 The Loyola prof’s most recent publications have focused on teaching writing (his latest, “Revision,” tackles the art of editing), but that doesn’t mean the “Skating in the Dark” author isn’t cooking up some new fiction of his own.

Where are you based?
In the West Walker area, near Old Irving Park, but I teach fiction writing at Loyola University Chicago.

Your last book was a non-fiction writing guide, “Revision: A Creative Approach to Writing and Rewriting Fiction;” before that, you published a novel, “Skating in the Dark,” and a book of short stories, “Comfort.” What have you been up to since? What are you working on these days?
Since then, I’ve published short stories serially in magazines such as TriQuarterly, DoubleTake, StoryQuarterly, and Five Corners Quarterly, and had some in anthologies such as “The Scribner Anthology of Contemporary Fiction.” I also won the Nelson Algren Short Story Award in 1999, and was a runner-up in 2005. I have just finished a novel, “Luna Park,” which I’ve been working on for quite a while, to the short shrifting, alas, of short fiction.

You direct the creative writing program at Loyola. What’s your approach to teaching fiction? If your students walk away from your classes with one thing, what do you want that thing to be?
I teach by the good old workshop method—students reading master writers, writing original stories and getting feedback on them [from the group]. If there’s one or two things I’d want my students to come away with, it would be that fiction is the closest thing to magic we have in this world—magic defined as the ability to make the unreal, the fictive, seem so real that we respond to it, as readers, as if it were real—and so what they’re really learning in a writing workshop is how to begin to become magicians.

Take me through your daily writing routine—do you work on a set schedule, X words/pages/hours a day, or do you binge-write when inspiration strikes? From home, the library, a coffee shop, a “space”?
I take notes on work and do revisions of drafts almost anywhere, but usually in a coffee shop or on my front porch or deck, weather permitting. First drafts are always in my office at my desktop computer—I haven’t yet sprung for a laptop. Routine: I try to write in the mornings, ideally for three-to-four hours—it may be writing a draft, taking notes, revising or a mix. This is the ideal, which rarely seems to happen, especially when the university is in session. Teaching and administrative responsibilities get first dibs. Also, I’ve noted that I seem to have less time for writing ever since I became a parent some years back—funny how that happens…

Best place to get inspired in the city?
Pretty much anywhere. Anything can happen anytime, and of course, may be totally unrelated to one’s surroundings.

In an alternate life, the one where you aren’t a writer, what would you be doing?
Ah—easy. In my fantasy alternate life, I’d either be a ballet dancer or a film director. Or a world traveler, though exactly how I’d get paid for that without writing, I don’t know. And really, I’d rather be a screenwriter than director.

What (existing) book did you not write but do you wish you’d written?
I’ll give you three: “The Moviegoer,” by Walker Percy; “The Magus,” by John Fowles; “V.,” by Thomas Pynchon.

Word or phrase you find yourself over-using?
Can’t think of one, though I probably do. But I always feel like I’m desperately searching for words more than overusing them!

Anything coming up in Chicago—literary or not—that you’re especially excited about?
Yep—the possibility of an American Writers Museum here in Chicago. Planning is already happening for such, which will be a museum devoted to American writers and American literature, past and present, as well as [a possible] venue for readings, performances, etc. The hope is for it to have not only national, but international recognition as a literary destination.