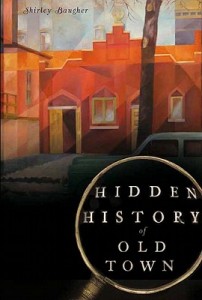 A longtime resident, Shirley Baugher writes of the “Hidden History of Old Town” with deep affection, in an accessible, conversational style that is at turns humorous, matter-of-fact and even reverential toward that significant piece of North Side real estate roughly bounded by North, Clark and old Ogden Avenue. She grounds us thoroughly in pertinent history such as the relocation of the old City Cemetery from Lincoln Park, the Great Chicago Fire and the reclamation of St. Michael Church before interrogating the myths—and even “ghosts”—of Old Town.

Some myths are bound to endure, such as the story that Richard Bellinger saved his home at 2121 North Hudson from the flames of the Great Fire through the diligent application of apple cider. The truth seems to have been nominally close but the tale is simply too romantic to die.

We can at least hope that Baugher’s is the final stake driven into the heart of David Kennison, self-proclaimed veteran of the Boston Tea Party and Bunker Hill, who claimed to be 115 years old when he died; sad, perhaps, that when such voracious liars are unmasked they may never get credit for their actual achievements.

But the heart of this book is Crilly Court—arguably the residential creative core of Old Town—and Baugher makes a foray into the lives of many of its better-known residents. The first of these were the early twentieth-century film stars clustered about Essanay Studios, sadly not among them Charlie Chaplin, who resided elsewhere on the North Side. The author also offers more intimate (presumably from actual acquaintanceship) portraits of more recent residents, like the late poet and editor Herman Kogan and son Rick, wide-ranging Chicago Tribune writer, and Chicago “Bon Vivant, Boulevardier and Old Town Kid.”

This is not to say the author does not offer many nice postscripts into the modern era, but it is here where the reader may notice lapses or omissions. She could have thrown a wider loop, beyond the silk-stocking artists, including, for example, jazz drummer Barrett Deems. And where in the list of watering holes, for another example, is the great writer’s bar O’Rourke’s, presided over by wire-haired Jay Kovar? And Baugher’s recounting of the meeting of Old Town singer-songwriter Steve Goodman with Arlo Guthrie over the former’s song “City of New Orleans” omits the persisting story that the two were brought together by Dick Harding, owner of The Quiet Knight and Chances R.

She does mention Jeff’s Laugh-In, an all-hours hangout on the ground floor of the Hotel Lincoln, but I for one would like to know how much of David Mamet’s plays and essays may have been written there or in the place’s successor diner and coffee shop. (And how well did he tip? This seems to have been key to the long-suffering waitresses’ tolerance of this writer’s otherwise-frugality when he wrote there during odd but long hours.)

But if what you’re looking for is stuff like where Belushi and Aykroyd played after hours from Second City, you’d best look elsewhere—or watch for Baugher’s next book.

Back in 1983, when I lived on Cleveland south of St. Michael, I had a neighbor, John, who worked for Streets & Sanitation and whom I discovered had worked in the same near South Side factory with me a decade earlier. When any of us verged on telling what might have been a whopper, John would cock his thumb over his shoulder at the bell tower of St. Michael and state, “Say ‘Honest to God.’”