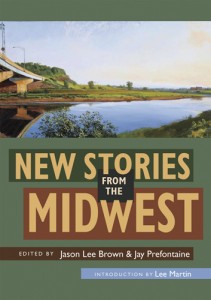 In his foreword to “New Stories from the Midwest, ” Lee Martin takes up his author’s cudgel against an assertion that the Midwest has yet to “produce a Faulkner.” If what was meant was that the region has not birthed a great writer, that notion is quickly rebutted, as Martin demonstrates with a deft listing.

But his target is a straw man, beside the point in making a case for what purports to be a regional collection: Faulkner was a short-story writer who was also a novelist, but not all great novelists are accomplished writers of short fiction, the medium sampled and assayed here. Moreover, Faulkner was a great writer with a sense of his place—the South—the maestro amongst voices recognizably “Southern.”

Against the example of Faulkner and his colleagues, can we even say there is an identifiably Midwestern regional literature today? And what can we say about its quality as expressed in the short-fiction form?

Because the editors have taken the high ground of admitting (almost!) only the best recent work by writers with Midwest ties, we can readily affirm this volume’s high quality. It includes wonderful stories of high merit.

However, in not selecting tales with specifically regional geographic or thematic links, they leave us to wander a landscape without landmarks, pondering whether there is any regional literary common denominator at all: Maybe, after all, the Midwest is a “place of no place” with few commonalities.

Instead, two strong threads emerge here that are difficult to associate specifically with the Midwest—a pining desire for connection, and a deep sense of loss. Almost all these stories involve one or the other concern; many share both. (Poignantly, Jason Lee Brown’s co-editor, Jay Prefontaine, died before this joint publication appeared.)

The dual issues animate Rosellen Brown’s “The Threshold.” While the writer teaches at the School of the Art Institute of Chicago, her narrative comfortably wears a New York City setting. The protagonist is a previously unmarried middle-aged college professor who believes she finally may have met her romantic match in a seemingly sweet, older, widowed academic. Alas, the needs of the heart are not so easily met, nor happiness so simple: The best we can hope for may be much more tentative.

Although other environments range far afield from the Midwest, there are also stories set, for example, in Michigan and Chicago. One of the latter (i.e. of 1970s suburban Chicago), James Magruder’s sympathetically wrought “Tenochtitlan,” pairs two precocious grade schoolers for a Social Sciences project—an odd-couple team consisting of a boy fantasizing about the reunification of his separated parents and an outcast kid, “the brown of gingersnaps, because his mother was Mexican.”

For their project, Mike is thinking about a model of the clean, symmetrical mansion of the governor of colonial Williamsburg, but finds himself drawn into Donnie’s enthusiasm for the Great Pyramid of the Aztecs. “Hey, Stubbs,” a sneering classmate inquires of Mike. “What was the name of that thing you’re going to make with Frito Bandito?” “Tenochtitlan,” Mike answers nonchalantly. “Ten-knock-titties,” another quips, to boyish guffaws. What ensues is an engaging inquiry into juvenile pecking orders, shifting loyalties, the price of excellence and the inevitability of change.

The challenges of assimilation and individual identity are further explored in Hubert Ahn’s “Korean Wedding,” juxtaposing the desire to fit in with the tensions of ethnic expectations against an almost manic evocation of American pop culture. While most of the story occurs in the east, the protagonist is a second-generation Korean American from Chicago, thus occupying a fresh corner of the Windy City’s immigrant experience.

Kim Brooks’ fine but almost old-school “The Houseguest” harkens back to an earlier generation’s immigrant dilemma: The challenge of accommodating a mournful, unmoored, Holocaust-escaping actress of artistic temper into an established Jewish-American household.

So, the yearnings of the human heart, death and change—these are certainly not the particular concern of Midwest literature, though they are of these accomplished stories. Many are layered and dense, but a few ring with the plain-speak of Farrell or Sandburg. All are worth a sojourn. (Though the gothic “The Tree” seems an inexplicable sore thumb.)

Reading them will enrich you and even make you wiser, but the riddle of what makes literature “Midwestern” remains. Speaking of riddles, if you can figure out the conclusion of the mesmerizing but enigmatic “The Drowned Girl,” please let me know. Read, ponder, and write me.

Thank you for the mention of “Tenochtitlan” in your thoughtful review. My favorites in this anthology would have to include Janice Deal’s “Dinosaurs,” Bryan Furuness’ “Man of Steel,” and Ben Percy’s “The Tree.”

James, You’re welcome!
I’m sorry I missed your comment when you initially posted it.
Yours was a great story, and you must be pleased to be in such good company here. As a sometime literary editor (in addition to being a journalist and historian), I well appreciate the challenge of putting together good and thoughtful collections.
Continued good luck with your fine work.
Best regards, Martin Northway