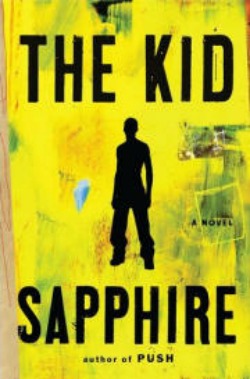 “The Kid” is Sapphire’s long-awaited follow-up to her 1996 first novel, “Push.” That slender novel was of course made more famous by the 2009 film by Lee Daniels (who, Sapphire writes, “quite simply changed my life”), “Precious.” In “Push,” Precious Jones, a young, obese, pregnant, illiterate teenager who is sexually abused by both her mother and her father finds a school where she and other women are encouraged and supported and learn to read and write. Her story, despite the horror, is an invigorating tale of the possibility of language and learning—a paean to the power of words to change a life.

“The Kid” picks up about nine years after “Push” ends, on the day of Precious’ funeral. While fans of Precious Jones will be happy to hear that she and her child, Abdul, had nine wonderful years together, in which Precious continued her own education and helped develop a love of learning in her son, she did fail to make arrangements in the case of her death. Abdul lives for a very short time with an extremely poor friend of his mother, but due to her failing health he is quickly moved into the foster system, where he immediately suffers physical and sexual abuse at the hands of another child in the home. And so his series of misfortunes begin.“The Kid” often unfolds in a stream of Abdul’s consciousness, which has a tendency to become monotonous, despite Sapphire’s poetic gifts. While they might give the reader minute insight to Abdul’s childish, confused thoughts, these patterned areas do little to propel the story. Abdul lives as much in fantasy as reality, repeating a false mantra about his mother dying in a car accident and his father dying in an unknown war. “Brother Samuel never gave me shit. I was never a… a kid to Brother Samuel, maybe because I was almost as big as him, but what about the kids who were littler?  Because I was black? Most of us was. I wasn’t the blackest. Bobby, Etheridge Killdeer, blue-black, even though he was from Indians and had straight hair. Delete that shit! I ain’t there no more: My mother died in a car accident, and my father got killed in the war. After that, I went to live with my grandmother. Then I got a job and started to live by myself. I’m a normal person I’m a normal person I’m a normal person just like everybody else just like everybody else just like everybody else.”

Where “The Kid” really excels is in the exploration of abusive patterns. After losing Precious, the child is never provided with the emotional or physical protection young people deserve. In his family, generations of pain have prevailed—his great-grandmother spills out her own story of being raped at age ten and giving birth shortly after. He can barely tolerate the words she says, imagining instead she’s a giant cockroach.

Like “Push,” just when you think things can’t get any worse for the characters, they do, and in Abdul’s case, his bottom-of-the-barrel involves the ultimate nightmare scenario of being mistaken for a terrorist. This was an odd turn for “The Kid” to take, in that it removes the reader and the character from the realities of a defenseless and susceptible child in the foster system to the Kafka-esque perils of a post-9/11 world. Regardless of the relentless abuse of this young man, there is hope in his spirit and the promise of an emerging artist. (Kelly Roark)