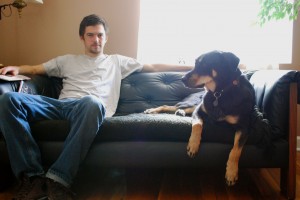 Where are you based?
I’m in Logan Square along with, it seems, every single student I’ve ever taught.

Your novel, “The Slide,” came out in 2009. What have you been up to since? What are you working on these days?
Well that depends on what you mean by “working.” I’ve been finishing essays that appeared in a few anthologies, plus several smaller fiction things for journals. I’ve also been running around in semi-futile circles with a second novel. When the circles have gotten too tight I’ve stepped away to work on a novella. These days the novel is like chewing glass. So these days it’s the novella.

You teach in the MFA writing program at Roosevelt University. What’s your approach to teaching fiction? If your students walk away from your classes with one thing, what do you want that thing to be?
It’s terribly basic, actually. We start by discussing just what nature of effect each piece is working toward—psychological, emotional, aesthetic, physiological or otherwise—and then go from there. So we begin by reading and appreciating because I want them to walk away as more generous readers, less likely to write off any book or story for any of the selfish reasons we write things off. And to walk away knowing that learning and assholery are incompatible.

Take me through your daily writing routine—do you work on a set schedule, X words/pages/hours a day, or do you binge-write when inspiration strikes? From home, the library, a coffee shop, a “space”?
I write in very small pieces as frequently in a day as I can. I will write a sentence with coffee and another after feeding the dog. Writing this way does two things, the first which is to stop me from thinking in terms of finished products. Baby steps and all that. The other is it asks little from me in terms of time, because producing substantive work during the semester is difficult for me. And I’m worthless in the summer because just look at it out there.

What (existing) book did you not write but do you wish you’d written?
There’s a novel called “The Weather Fifteen Years Ago” by Wolf Haas, in which the narrative itself is buried inside of an interview, so all plot and action and emotion have to sort of sneak into the frame. It’s lovely.

Word or phrase you find yourself over-using?
I’ve got this large skateboarding side to my life, so I often hear myself saying “sick” and “rad” and kind of dragging them out, camping out on each syllable. Writing is different, and it’s less an overuse of diction as syntax. I settle into patterns of clauses that I suppose mimic the way the image or situation unfolds in my thoughts. I guess this is one definition of artifice—breaking the inertia of this pattern.

Anything coming up in Chicago—literary or not—that you’re especially excited about?
I’m excited to see how JC Gabel’s new project looks once it’s finished, not least because I’ve got a long essay in there about boredom and skateboarding and the Davids, Foster Wallace and Carnie. Anders Nilsen did illustrations for the essay, and the list of folks involved is impressive. Again, the city burbles.