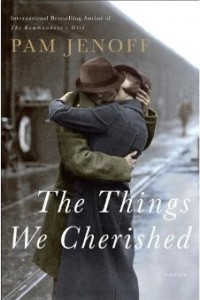 “The Things We Cherished” is something of a mystery novel that unravels what happened to a family during the Holocaust. In Pam Jenoff’s century-spanning novel the things that were cherished were very seldom things.

Charlotte Gold is a former war-crimes investigator, now a public defender in Philadelphia. When her ex-boyfriend appears out of the blue and asks her to immediately travel to Germany to help in the defense of an accused Nazi collaborator, she hesitantly agrees. The client is Roger Dykmans, who is charged with turning in his own brother, a hero who saved thousands of Jews during WWII. Roger’s actions caused his brother to be arrested and killed, and hundreds of children he was trying to save to be murdered.  He refuses to cooperate in his own case.Interspersed with the chapters on Charlotte and her attempts to prove Roger guilty or innocent, the book follows the history of an object—an anniversary clock. It’s created by a rural farmer in Bavaria in 1903 and the fragile object survives through the wars.  Not surprisingly, it has something to do with Roger’s case.

“The Things We Cherished” owes an obvious debt to Geraldine Brooks’ illustrious “People of the Book,” which has a similar narrative trajectory and unfolding mystery. Jenoff lacks the elegance of Brooks, and has a tendency to lean toward romance (the horror!). But her amusing descriptions do stop short of the obligatory bulge. “Brian had the tall, broad-shouldered frame that fashion houses paid good money for, brown hair that flopped improbably to his forehead no matter how many times he got it cut to a shorter, more professional length. Despite the muscular arms that suggested a threat on the basketball court, he conveyed an air of vulnerability that implied he might cry at a chick flick and made women want to take care of him.”

Charlotte is a beautiful woman, despite her “knit pantsuit.” Jenoff’s prose is, at best, merely straightforward, and, at worst, leaning toward romance, but the story is nevertheless compelling and it is quite easy to become engrossed in the parallel story lines.The author raises the question of the value of pursuing war criminals in their advanced age but stops short of exploring it fully. It would have been interesting to see her pursue this further: Jenoff’s background is history and law. The aging Roger, along with other WWII criminals, is so infirm they wonder if he’ll survive the ensuing trial. Charlotte’s internal questions are easier to grapple: which handsome brother she loves, which job to follow. Ostensibly she left her work as a war-crimes investigator for the relative peace of a public defender. Once she reacquaints herself with the thrill of following a decades-old lead, she can’t deny the excitement. In this modern romance, she finds her man and the job of her dreams. (Kelly Roark)