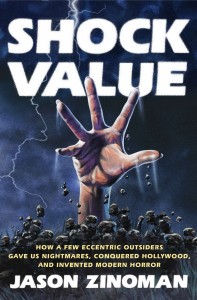 There have been other respected critical studies of horror films, but Jason Zinoman has just written the most essential one we’ve seen yet.

In “Shock Value,” Zinoman, a theater writer for “The New York Times,” aims his critical eye and his hard reporter’s nose at the era of horror that gave us “Halloween,” “The Exorcist” and “The Texas Chainsaw Massacre,” among others—the period from the late sixties into the very early eighties that many regard as the genre’s golden age.

Though clearly a fan, Zinoman looks at the genre objectively (or, as objectively as one can look at hacked-off limbs, demon babies and aliens springing from people’s torsos). He scores interviews with the people who made and starred in the films, digs up the stories of back-room deals and changing MPAA laws and cultural perceptions of the genre and sometimes even goes shot-for-shot.

Reading the book feels like watching these films with good, smart company. Zinoman also serves as something scare-flicks desperately need: an enthusiastic defender. He begins with the origins: the always-nocturnal and often-cartoonish world of “Frankenstein” and “The Wolf Man” and, God help us, “Frankenstein Meets The Wolf Man.” Films designed to spook teenagers into the arms of their dates.

Seen as an artless endeavor at best, and the work of mind-corrupting weirdos at worst, the genre further freaked out mainstream America as it moved into more realistic, and more violent, territory.

This was the New Horror, as Zinoman calls it.  Rather than transporting us to Transylvania where a caped Bela Lugosi was slurping the blood of the locals—cinematic escapism, to be sure—the New Horror took place in our backyards and our apartments.  Rather than acting as a window to fantastic worlds, the New Horror acted as a mirror, reflecting the most fragile parts of ourselves, forcing us to confront ugliness and pain and, most importantly, showing us something that appeared real.

It’s easy to imagine the sound of the crowds the first time they saw cannibal rednecks hunting teenagers on the silver screen, or when a possessed pre-teen masturbated with a crucifix: blood-curdling screams of moral outcry.

But people kept going to these movies, critics started taking them seriously and studios realized there was a market for blood and guts. Moreover, people began reading them as astute social commentaries.

“Night of the Living Dead” seemed to symbolize the counter-culture of the sixties (director and zombie maestro George Romero says he just wanted to make a zombie movie). “Halloween” was about morality and sexual mores (although director and co-writer John Carpenter denies this reading).

And yet, still, despite years and years of horror films that have pushed boundaries so far as to make gut-wrenchers like “Alien” look relatively tame, wisps of the public perception of horror movies as lowbrow and their enthusiasts and purveyors as strange still linger in the public consciousness.

By looking not just at the way these films give us the willies, but driving at the how and the why, Zinoman’s book illuminates even the darkest corners of horror. (Eric Lutz)

Jason Zinoman will appear at the University of Chicago Doc Films October 14 at 7pm for a discussion and to present a restored short horror film, “Foster’s Release” along with John Carpenter’s “Halloween.” Max Palevsky Cinema in Ida Noyes Hall at The University of Chicago, 1212 East 59th Street,  (773)702-8574. $5.