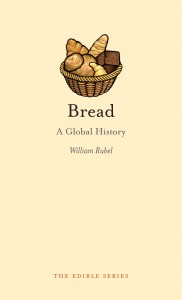 I pour the sediment from a bottle-fermented beer into a container with some flour and water, let it sit for a couple days to bubble, then make a successful loaf of sourdough bread for the first time in my life. The entire process takes me three days.

William Rubel has me rethinking bread.

Through Rubel’s eyes, this seemingly simple category of food—a side to any dish and vehicle for any topping—tells a cultural history of humans from the center of the table. “Bread is so twined with culture,” he writes, “that one can start from a loaf of bread and find oneself talking about some of the largest issues of history and society.” Rubel’s book, “Bread: A Global History,” is part of “The Edible Series,” a collection of books written by various authors on specific foods and their historical contexts.

First, Rubel examines bread at its most likely origins: a necessary process for grains, which were indigestible by humans if not processed. Grains left in grindstone dug up by archaeologists suggest that breadmaking predates agriculture. In the age of agriculture, farmers choose their grains by what is most easily milled into flour for bread. Later, bread is transformed from a simple source of nutrition into a social marker, a piece of tradition and, in modern practices, a hobby and a science.

Rubel brings in examples from art and history, including the eighteenth-century English practice of feeding horse bread to the poor and white bread to the horses. He explicates the economic reasons behind the seemingly arbitrary shifts in what people define as “good” bread, showing how softness, chewiness, fineness, openness, crustiness or moistness could each change the social marking of bread depending on how exactly the bread was made and its cultural context. The enviable soft white bread of the past has become the cheap Wonder bread of today, not a delicacy any longer but instead an icon of poverty.

Rubel also enthusiastically discusses what bread might become next. He speculates that as the science of breadmaking deepens and we fine-tune the process, both bakers and industrial bread scientists may reconnect with brewers to breed new strains of yeast that not only leaven bread, but give it the complex flavor profiles of craft beer and wine.

The book closes with recipes and additional resources for making bread. However, these recipes take a different form than what one might expect—they are filled with commentary on the historical place of each bread, the classic methods of baking down to the smallest detail, and suggestions for emulating the old-world way of making each bread. Rubel clearly has a deep fascination for the world of bread, and will give a taste of that same fascination to readers. (Abi Stokes)

[…] Welcome! Posted on September 30, 2011 by William Rubel “William Rubel has made me rethink bread.” Abi Stokes reviewing my book Bread in Newcity Lit. […]