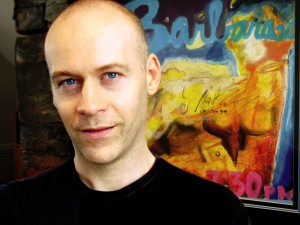 Australian author Max Barry recently published the science fiction thriller/dark comedy “Machine Man.” The novel is the second incarnation of a story he originally published online as a serial, one page at a time. Rather than a reprint of the online content, the novel “Machine Man,” is a distillation of Barry’s original idea: a future in which corporations turn people’s bodies into a product, a weapon or worse. The movie rights for the book have already been purchased, with Darren Aronofsky signed on to direct it. Max Barry recently talked to us about writing a serial, his Skype tour and the changing landscape of publishing.

How did writing in serial, on the Internet, affect your process—and your end product?
The readers really helped me keep track of how the story looked to someone who’s not writing it. That is a difficult thing to keep hold of when you’re writing a novel. You tend to veer off into your own world. When you’re halfway through you can forget why you started and what story you mean to tell. You keep veering off in strange directions. [Writing in serial] was a really good way to keep me grounded. The story didn’t veer off into ridiculousness, which happens sometimes with my first drafts.

What kicked the whole thing off was that I’ve never been really satisfied reading fiction online. I found the Internet to be a really distracting medium. I can’t give myself over to a complete chapter to read. The idea was to write a serial where each page would be very short, something that people could just read for a couple minutes and then get back to what they were doing. It would be in their inbox and it would be just a distraction, competing with all the other distractions.

Various people have tried with varying degrees of success to try and do Twitter stories. I felt like each of those were interesting in their own way, but I thought something on Twitter was too short for me to do something interesting. And a chapter was too long. So I thought I could do something in between a couple hundred and six hundred words. They would vary. Some days I would give pages that were just a single sentence. Being able to control the passing of the story like that is something that I just can’t do with a normal novel.

I started doing it five days a week. I had to figure out and then respect the strengths and weaknesses of the medium. For example, each page I had to start with some sort of subtle reminder of where we were in the story. I had to make the thing fairly self-contained, without too many references—to make the thing satisfying in its own right. And, ideally, I had to leave the reader on some sort of cliffhanger or looking forward to the next page. So it’s a series of cliffhangers: 185 cliffhangers.

Did producing a cliffhanger every day end up being useful for your final product of the novel that you published in print? Did it fuel you in creating cliff hangers you wouldn’t otherwise have come to, or did it lead to a lot of ridiculous things that hit the cutting room floor?
It was a bit of both. I pulled out all the stops so if I had a way-out-there idea I would run with it. See how it went. When it came time to distill this thing down to a novel I had all this material to choose from. But the problem was when I actually read the serial straight through, start to finish, it didn’t work as a novel at all. Because of all this cliffhanging, you couldn’t go two minutes without a cliffhanger knocking you out of the story. It felt incredibly stop-start, and I had to do a lot of work to retell the story as something that you could sit down and tear into for a few hours. I had to do a lot of rewriting to fit the format of a novel.

The serial is about 50,000 words and the novel is about 85,000 words. It’s the same core story. I feel like if you described the serial in three sentences it would sound exactly like the novel, whereas if you actually picked out a part of them they are quite different.

What was it like putting a piece of writing out there every day and getting instantaneous feedback on it?
The actual writing part was not too dissimilar from what I normally do, because it’s me sitting at my computer writing a few hundred words every day. But posting one page of this thing on my website each day and then having people read it straight away… They were reading a first draft ostensibly and then posting their comments that I would read. That would guide the story. That was completely different to how I’ve operated before. I don’t think it’s something that I could have handled if I was any earlier in my career. It’s quite intimidating writing with someone reading over your shoulder.

It was on my website, so I hoped for kind of a positive bias—if you sign up for maxbarry.com presumably you like what I write. I didn’t get that negative feedback that made me curl up in a ball, and be unable to write any further. The readers really helped keep me motivated and keep me going on with the story. People suggested all kinds of ideas, some of which I used, some of which I didn’t. 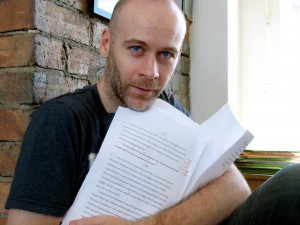 There was pushback. At first, the publisher offered me a contract that said I would have to take the serial off the Internet. I felt that was self-destructive. First of all, I didn’t want this serial to disappear from the net. I felt it was an end product in its own right. It was similar to the novel but it was not the same story. But also in terms of marketing I didn’t think it made sense. They can read the book and the serial or just the serial if they want. But it’s all just helpful. People can find and choose the content they like. We convinced the publisher to allow us to keep that material up as long as we made it clear that the serial is different from the novel.

I heard you did a Skype tour.
The publisher wasn’t doing [a traditional book tour]. I thought, “Well, it’s always good to actually get to talk to people. It’s like my one opportunity to actually go and physically meet the people who read my books. It would be insane to miss that altogether.” And I had the idea of doing the Skype thing.

I had been bracing myself for a lot of insane people. The sort of person who really wanted to talk to me. But the people were wonderful. There was not one insane person among them. I had eight or ten minutes to talk to each person. When it’s in line, it is nice to actually sign a book for someone, but they get maybe thirty seconds tops and then that’s it.

Many authors have print books that are now going digital. How is it going the other way?
A lot of reading is moving from print to electronic, and I feel like I’m out in front of that since I have always dealt with an electronic medium. I don’t think that people switching to e-books from print is such a bad thing at all. [In the past,] I don’t think it’s been that easy to find good books. You have to talk to people who share your interests or read newspapers with reviewers you agree with. With the Internet, we have these vast data networks that can actually figure out with a fairly high degree of accuracy which book you’re likely to love next based on what books you’ve liked in the past.

I think the reason that people don’t read more books is they read a few bad ones, or they read a few that don’t engage them, and they give up. They go watch television or movies or browse the Internet. If we’re moving to a model where you can reliably find good stories then that’s going to be fantastic for the industry. I think people fundamentally want to read great books and the only reason they’re not buying more of them is because it’s too hard to find them.

Who are your greatest influences, beyond your commenters? Maybe because I love Vonnegut, I got a Vonnegut vibe.
Yeah, look, Vonnegut is one of my favorite writers as well. That’s not something that I consciously dealt with while I was writing. But I have read a lot of Vonnegut and I would be surprised if that didn’t influence me in some way.

I feel like this was kind of a Philip K. Dick story as well. Philip K. Dick wrote a lot of short stories about people discovering that their physical forms are less important than they think. So that’s very much at the core of this kind of story. And when I was a teenager I read so much Stephen King—now and again little elements of horror pop out.

What’s next?
I would like to do another serial. The idea I have for the next novel jumps in time and involves different characters’ perspectives, so I really need to be able to work on my own for twelve months so I can rearrange pieces. But if I have another idea that fits a serial than I’d love to do another one. It’s been a couple years since I started the serial. So I feel like I’m due for another one.