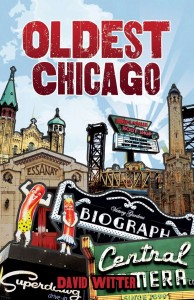 You don’t have to be a history buff to love David Witter’s “Oldest Chicago.” You don’t even have to love Chicago, but surely you will after reading the author’s exultant but informative paean and guide to the city’s most enduring places.

By his own account, Witter, an occasional freelance writer for Newcity, began his romance with Chicago history as a child, playing cops and robbers in  the shadow of where John Dillinger was killed–the Biograph Theater. This volume is filled with stories of many such familiar haunts, but there are also less-known places, like the Oldest Camera Store (Central Camera Company, 1899), Auto Repair and Body Shop (Erie-LaSalle Body Shop, 1934) and Tamale Shop (La Guadalupana, 1945).

Obviously aware that firm declarations of first deep-dish pizza can get you into extra-deep trouble in a city as well-armed as Chicago, Witter prudently surveys questions about the origin of deep-dish pizza in addition to reporting the founding of Pizzeria Uno in 1943.

Witter embellishes his chapter narratives with chatty sidebars on interesting aspects of the locations’ neighborhoods. He takes the Old Chicago Water Tower as an opportunity to chat up the nearby Allerton Hotel—its height marked by its unavoidable white “Tip Top Tap” sign. (I can attest that it makes a charming launching pad not just for out-of-towners but for an in-town getaway to North Michigan Avenue as well.)

Some locations get more ink just because Witter likes them. But there is an especially welcome surprise awaiting readers “visiting” the Medinah Athletic Club’s Olympic-size pool—he tells his story of lifeguarding there in the early eighties and getting visits by Tennessee Williams, who was in Chicago for the Goodman’s production of his last play, “A House Not Meant to Stand.”

Witter’s accounts range across the city, suburbs and even “exurbs” like Racine and Kenosha, but any reader may be forgiven for wanting “more more.” It’s great that Oak Woods Cemetery  on the South Side, with its thousands of Confederate soldiers buried next to prominent African Americans, gets its due here, while elsewhere he also manages to include giant, historic Graceland on the North Side. But what about that other great golden-but-moldy, Rosehill?

And, how about more South Side? Say, Pullman, “oldest company-built neighborhood” and its Hotel Florence? Or, “oldest university,” Saint Xavier, founded in 1846? And how about the University of Chicago?

There are a few typos and lapses: U.S. Route 66 was not commissioned in 1960 but 1926. McInerney Funeral Home is not really on the Southeast Side. And yes, it’s Chicago Brauhaus not Brauhouse. Witter’s right about the cinematic quality of John Kinzie’s life, but there’s reason to doubt the self-serving tale—and claimed longevity—of David Kennison (1736-1852!), interred in Lincoln Park.

The author suggests in his introduction that readers help preserve Chicago’s great old places by opening their wallets for patronage or donations; I suggest another way is to buy this book. My copy has already found a comfortable place next to my well-thumbed “Hands On Chicago” by Kenan Heise and Mark Frazel. (Martin Northway)