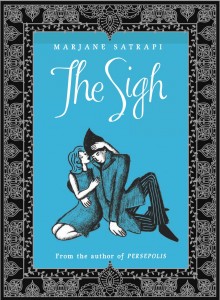 Marjane Satrapi is best known for her autobiographical graphic novel work, “Persepolis,” which was later made into a film. Her latest project, “The Sigh,”  goes in a new direction: Rather than stories from Satrapi’s life, “The Sigh” is a fairy tale about a woman in a fantastical world who’s trying to save her lost love. It’s told as an illustrated story rather than a work of sequential art.

The eponymous sigh, which begins the story, summons a magical creature, Ah the Sigh, from the Kingdom of Sighs. Rose, a merchant’s daughter, follows this creature back to its realm where she meets and soon loses a prince.

The story builds in traditional fairytale style with one important difference. Instead of allowing herself to be held hostage by her strange world, Rose becomes an adventurer who moves the story forward. Unlike Rapunzel or Cinderella, she’s not a damsel in distress waiting for a man to save her. Instead, Rose sets out to rescue her prince and ends up helping a number of families by saving their sons and husbands from various magical predicaments along the way.

The story reads quickly, with frequent pictures keeping the magical world present. The simple evocative backgrounds from Satrapi’s previous works are largely gone here. Because the book has prose passages, the illustrations no longer do as much of the storytelling. Instead, they show the emotions and reactions of the characters.

Though the art style will be familiar to people who have read “Persepolis,” rough coloring helps to highlight the fantastical material and whimsical subjects and to emphasize the contrast between Rose’s home world and the magical one she is brought to by the sigh.

“The Sigh” is an all-ages book but it would be perfect for an intelligent nine-year-old. Adult comic readers and fans of Satrapi’s other work may find the story too light. It’s a charming adventure, enjoyable as long as you go in knowing you’re getting a snack, not a meal. (Casey Brazeal)